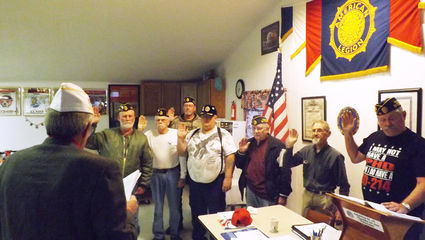 The annual installation of officers of the Louis E. Canady American Legion Post 60 in Pine Bluffs took place in the legion hall Wednesday, May 10.

The swearing in of the officers was conducted by Wyoming's American Legion Department Adjutant, Doug Hensala, Chief Master Sgt. of the Wyoming Air National Guard, Ret.

"I wish we had more posts that are active in the community. I appreciate the tributes you provide to your fellow veterans," Hensala said.

Hensala went on to say that the Louis E. Canady American Legion Post 60 of Pine Bluffs was a model for other posts in Wyoming.