From Iowa to California on a mission of love 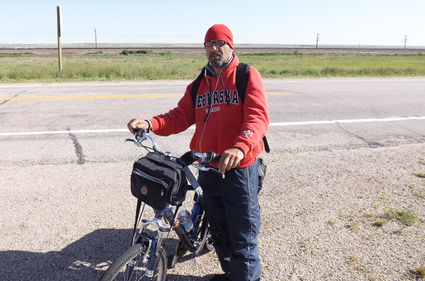 Iowa resident Glenn Offerman is traveling to Sacramento, Cali. by bicycle to raise money for his younger sister's fight against cancer.

Glenn Offerman, 52, with minimal preparation and no training, left Cedar Rapids, Iowa on May 14 in attempt to reach Sacramento, Calif. by bicycle.

"I am doing this to raise money for my baby sister," Offerman said.

He crossed the Nebraska/Wyoming border at about 8:50 a.m. on May 30, having left Kimball, Neb. that morning. He had not intended to travel US Highway 30 on his trip but stated that he missed a turn somewhere along the line. He is about 200 miles south of where he would like to be.

He intended to make Cheyenne by night...