Sportsmans Club is on target with annual fun shoot 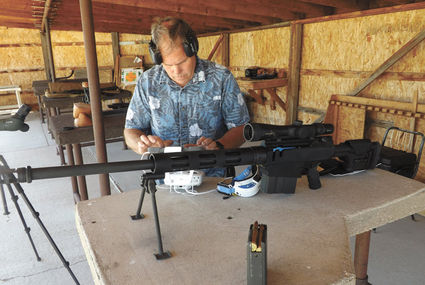 Phil Brooks is in the middle of the elaborate preparations in order to fire his Bushmaster .50 caliber, during the Pine Bluffs Sportsman's Club July 4 annual meeting and fun shoot. He is preparing to fly a drone to the target area so that a video can record the shot.

The Pine Bluffs Sportsman's Club held its annual meeting and fun shoot on the Fourth of July at their shooting range off of Muddy Creek Drive.

The election of the club's officers saw the incumbents returned to office for another year.

Re-elected president was Kevin Borquez. Charles Cunningham was returned as vice-president with John Wise and Patrick Self reinstated as treasurer and secretary respectively.

After the meeting, a lunch was served. John and Diane Wise did service at...