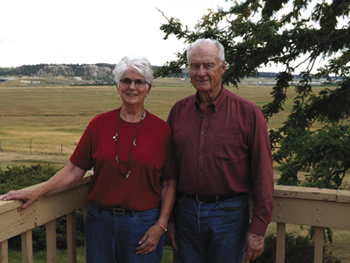 Trail Days Grand Marshals Phyllis and Bill Gross on the sun deck of their home.

"I feel there are people way more deserving than we are. We never get terribly involved, so we feel there's others that do a whole lot more than we do," said Phyllis Gross on a muggy Monday afternoon.

Phyllis along with her husband, Bill, were chosen this year by the Trail Days Committee to serve as Grand Marshals.

Phyllis was speaking in the dining room of her home. Bill was, at the time, out tending to the cattle.

"Bill's parents lived in this house and we lived in town. But this house was down here right at the end of north Main here and when they built that overpass, they condemned us. And so, we looked and we looked and we looked at plans and couldn't agree on one. So we decided to move our house. We moved the barn first, 'cause the right of way was going right through it and it was going through the barn, right through our yard, you know. The road used to curve and go into town right there, there wasn't that road here to the overpass. So that was in '85, '86 I guess, but the spring of '86 we got back in it," Phyllis said.

"We were able to move it in one chunk. One mover wanted to cut it in half, but then we found this mover in Nebraska who says, 'Oh no, I can move it.' And he did a great job," she continued.

When they were building the overpass for the Albin Road, the Grosses had sold fill dirt for the project.

When their Nebraska mover was finding himself unable to pull the house up the hill, workers from the overpass project came to the rescue with their heavy equipment to help pull truck and house to where it sits today.

"Bill's parents moved in it in, well Bill's grandmother, Mrs. Wilkinson, was living in it. Then when she died in 1954, they remodeled and moved in to it. Then Bill's mom died in '72 and when she died we moved into it. We were living in town until then," Phyllis said.

When the house arrived on the hill it was raised off the ground with railroad ties as the basement could not be formed prior to the setting of the house. According to Phyllis, the house was not square.

"It was built by a bunch of sheepherders because the thing isn't very square, so they really couldn't build a basement until the house was in place. Then they formed the basement under it. One of the concrete haulers said, 'Well, this is the first house that I could drive under the house to deliver concrete," Phyllis said.

She spoke a little about the couples family history. She spoke of Mary Elizabeth Dolan Gross Wilkinson, whose father was a civil war medal of honor winner from Ireland by the name of William Dolan. Later in the day, Bill noted that William Dolan, who was Bill's great grandfather, was also the first homesteader in Laramie county.

It is still a matter of conjecture to the couple whether the name Dolan was the name his great grandfather had when he emigrated from Ireland. Bill thinks that his name may have been Doolan but was changed at Ellis Island.

Earlier, Phyllis made an attempt to detail some of the family tree but had to admit that it was, in her word complicated.

When Bill had returned home from tending the cattle, he echoed his wife's earlier comment of how she thought others were more deserving of the honor of serving as Grand Marshals. In fact, Bill was prepared to name two or three couples off the top of his head.

It may be assumed that those who know the couple are not surprised by their self-effacement. Bill, in fact, had turned down the duty on a previous occasion. When approached a second time, this year, Phyllis relented on behalf of the couple.

Trail Days coming so soon after the hail storm that year, the Town of Pine Bluffs had its work cut out for it getting ready for the yearly celebration.

"Oh my gosh, they got the town cleaned up in that week. You know the park had seven of those great big pine trees uprooted! They were all cleaned up by the next weekend. You know, it was about ten days later and they did a wonderful job. . .It was good for everyone," Phyllis said.

The Grosses look forward to Trail Days every year.

"We get to visit with people we haven't seen in awhile and get reacquainted," Bill said.

Bill and Phyllis performed one Trail Days in the melodrama. Bill played the Hero, and because he must, the Hero won the fair Lady in the end, of the story, of the tale.