Pine Bluffs residents concerned but not afraid of North Korea 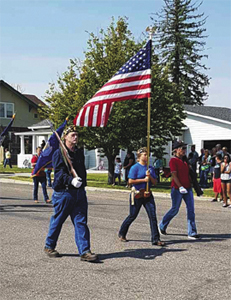 Natalie Montgomery carries the flag during Trail Days. Montgomery is leaving next week to become a member of the Wyoming Air National Guard. She will train at Lackland Air Force Base in San Antonio, TX. Montgomery has no fear of North Korea and is happy with President Trump's actions.

Natalie Montgomery, 18, of Pine Bluffs could hardly contain her excitement and pride when talking about the next chapter of her life. While many of her high school friends are heading to college, Montgomery is off to Lackland Air Force Base in Texas.

"I ship out on August 22," Montgomery said. "I'll be part of the Wyoming National Guard."

While training to become a medic tech with the Aero Medical Evacuation Squadron, looming large on any horizon is North Korea and its leader Kim Jong-Un. With the heated and ever-intensifying rhetoric between Jong-Un and President Donald Trump, some might b...