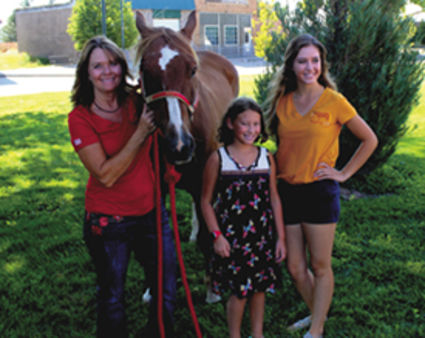 Rusty the Ranch Horse, second from left, at his appearance and book signing in Main Street Park in Burns. Mary Fichtner, to Rusty's left, is Rusty's biographer. Next to the equine is Julie Hoyt and far right is Roz Fichtner, who illustrates Rusty's adventures.

Celebrating the end summer and saying goodbye to the Summer Reading Program of 2017, both the Burns and Pine Bluffs libraries offered ice cream and horses Saturday in each of the respective muncipalities.

First up was Burns, where Rusty the Ranch Horse, 17, paid a visit to his fans in Main Strret park. It ought to be mentioned how much Rusty enjoyed the lush green grass of the park, chomping away at it to his heart's content and to his owners careful eye.

Rusty is a registered paint, even though his sire and dam were respectively white and black for the sire and white for the dam.The adventures of Rusty are chronicled in a series of books authored by Mary Fichtner and illustrated by Mary's daughter, Roz. Roz, in fact, has done such a good job of illustration that she has been approached by a couple of other authors to do work on their books. Rusty's latest adventure chronicles his journey to Frontier Days.

Returning to Pine Bluffs and the Texas Trail Museum, the Summer Reading Celebration was in full swing. Over 50 children and adults were treated to ice cream and horse and pony rides. The horses were brought to the museum by Jim VanCise, facilities manager at the Cheyenne Public Library.

Maya, 17, who used to be a therapy horse, carried all young comers around while led by VanCise and on ocaission by Nancy Sundin. Maya, who apparently does not like trains or their whistles, became agitated, though under control, each time a train would pass.

Soapy, who VanCise describes as a teenager, and is a Shetland Pony, also was available for turns around the park at the museum.

"I love to see the kids laugh and smile when they get on the horse," VanCise said. 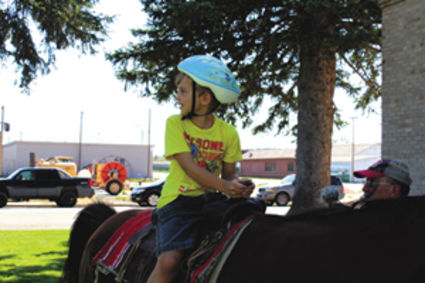 Nathaniel Michaud, 7, on Maya, 17. Jim VanCise is standing behind horse and rider.

Mary Cushing of the Pine Bluffs Library, stated that over 300 adults and children took part in the Pine Bluffs summer reading program. Paricipants were able to choose their own goals for the summer. Natalie Michaud, 5, chose to read 25 books, which she completed. Her brother Nathaniel, 7, chose to do 25 hours of reading and according to his mother, read about 30 books during that time. Each took a spin on Maya. It was the first time on a horse for both the youngsterrs. Nataniel thought the experience as, "Pretty good'" while his sister Natalie had a more ambivilent response.

"I'm very pleased with the turnout, especially with all the activities going on in town," Cushing said.

In addition to the ice cream and the horses in Pine Bluffs, attendees were also invited to tour the Texas Trail Museum.