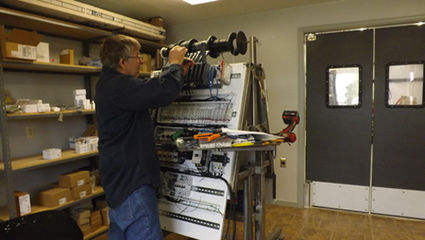 Jerry Michaud of JD Manufacturing is wiring a control panel for two fryer assembles that are being shipped to Honduras.

Little did anyone know that Rocky Mountain Snack would spur Jerry and Dennis Michaud to start a world wide Kettle Chip equipment company.

The building where Step By Step is now was the original Rock Mountain Snack company. Jerry Michaud became the plant manager, on occasion he would needed some help from his brother Dennis Michaud, that was at the time working as a stainless steel fabricator for Anheuser-Busch in Fort Collins. Dennis Michaud would come up and help with some of the repairs on the equipment, which work into him becoming employed by Rocky Mountain Snack company. Once he was employed full time the Michauds saw the need to automate the cooking process, they were one of the first in the industry to automate. The company at the time was doing co-packing for several different potato chip companies, engineers and quality control employees would come to audit the process and saw the automated equipment. They asked "where did you get it from?" The next questions was "can you build it for us?" Since there was not patent on the equipment that had been built under the JD Enterprise name (which would latter become JD Manufacturing) it started taking off. It was pretty nice to have the Rocky Mountain Snacks as a test lab for their equipment. During this time the owner of Rocky Mountain Snack sold the company due to health reasons. The new owner was not a fan of the Michaud building equipment at the factor. Land was bought in 1999 and the building at 309 Butler Ave was erected, J.D. Manufacturing was in business. Normally they are back up for year at most times with no notice of seasonal demand.

They specialize in process automation and control for kettle chip frying. Both Jerry and Dennis Michaud have engineering backgrounds. Jerry more electrical and Dennis more mechanical. This is a family owned and operated business that employees six full-time, three part-time, and one general contractor that works with them regularly. All of the employee live within 100 miles of the plant, six in the Town of Pine Bluffs.

JD Manufacturing equipment is shipped world wide along with a crew that installs it at the factory. Half of their sales are international with fryers on ever content with the exception of Antarctica. They can build equipment from the peeler to where product enters the packaging machine. All of the equipment that they have built and installed through out the world is all connected to the computer in the shop in Pine Bluffs. If for any reason the factory has a problem JD Manufacturing can log on to see what is going on and what need to be repaired or adjusted.

Continue potato chips are peeled and wash to take out the starch and sugar before frying; where as kettle potato chips are sliced right into the oil for frying, this keeps the full body of the potato. For ever 300 lbs. of potato, 100 lbs of oil is consumed. The fryer are designed with the cold oil coming in at the bottom and as the oil is consumed it moves up, most factories use only premium oil.

The Michaud have come a long way from the Rocky Mountain Snack company and are in their own rights quite proud of JD Manufacturing.