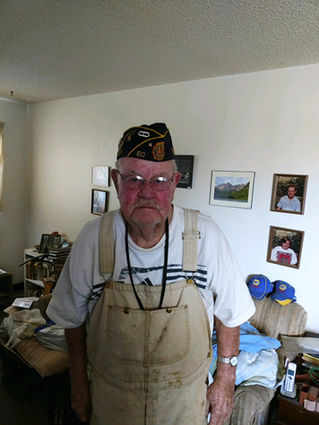 A tall giant of a man with a teddy bear smile is what one comes in contact with when they meet Thomas L. Morgan. This tall Korean Veteran entered the military at the age of 18.

The United States Air Force sent him to Texas,where he finished boot camp, the year was 1955. Morgan would spend additional time in Texas, at Shepherd Air Force Base for further training, before heading to Wyoming's F. E. Warren Air Force Base.

This was a weather shock, as he arrived in February of 1956, in the snow. He was quickly introduced to coal heaters!

During his early time in the Air Force, Morgan worked beside Vietnamese soldiers being trained. "Year later," he said,"we had to fight some of them!"

Morgan soon was transferred to K55, known as Osan Air Base in South Korea. He talks with fondness of his captain, Manville James Kai, whom he says is a "mustanger" (an airman who goes up through the ranks to be an officer). When the day was done, and his work on a M62 wrecker was still, his captain would arrange for his troops to check out rifles and go hunting and shooting. Due to this, Morgan was able to see much of the Seoul area. "The people were so wonderful, and welcoming to us!" said Morgan. "I really enjoyed my tour overseas," he fondly recollected.

Morgan landed back in the states at Laughlin AFB, Del Rio, Texas. His duties were lighter than the wrecker, and his memories are deeply moving. He praises a particular colonel for his saving of the U2. "Pilots are true heroes" Morgan states with pride in his voice.

In 1974, Morgan joined the Texas Army National Guard 49th Armor division. He spent a year with them and was too old for the Sherman tanks! From there, he moved to Wyoming with a good friend. He began to organize and do guns shows.

He retired in Pine Bluffs, Wyoming

This coming January, Morgan turns 81. He smiles, and talks about having to slow down a bit, and his upcoming battle to stop smoking.

The question was put to him of what would he tell someone in the now generation anticipating entering the military. Morgan, reflected for a moment and then smiled, saying "Well, their pay is going to be a lot better than mine! When I was an Airman 3rd class my pay was $39 a month!" After a moment of laughter, he turned serious, and said with much conviction, "Keep faith in our flag! Because it is going to be here long after we are gone!"