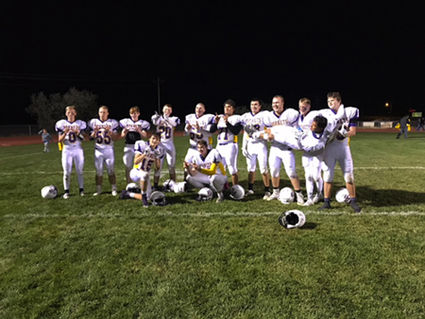 Hornet's dominated Friday night's game against the Wright Panthers in a game where they scored 13 in the first 3 minutes.

Coach Gray stated, "The kids started fast and played physical for the entire game which was great to see. It is exciting anytime you run back the opening kickoff, which helped us gain momentum and execute our game plan."

Total scoring for the first quarter was 20 - 0. Colby Lamb scored the first touch down from a 75 yard kick return in under 12 seconds. Kicker Andrew Fornstrom scored the extra point.

"We didn't throw the ball well, but we will get that fixed.  The passing game is going to be important down the stretch and we need to get our chemistry back in that phase of the game." explained Coach Gray.

After half-time, the Hornets scored two more touchdowns, one by Kyle Thurin and the second by Seth Tangeman. Both extra points by A. Fornstrom were good, adding another 14 points to the scoreboard.

The final touchdown was in the fourth quarter by Brian Steger on a 25 yard run, and A. Fornstrom bringing in the extra point.

"Defensively we played very well. They completed a few balls but we were in position to make tackles and keep the gains to a minimum.  Wright has a good young quarterback who is hard to contain and pressure.  I thought we did a good job of pressuring them and making them rush." summed up Coach Gray.

In preparing for next week's game against Southeast, Coach Gray said, "Southeast is a very good team that is disciplined and physical.  They run the ball very well and have lots of speed that can get to the edge.  We need to have a good week of practice and make sure we focus on the little things.  The Cyclones are a very good team and we will need to play as well as we can, we have all year to be successful."