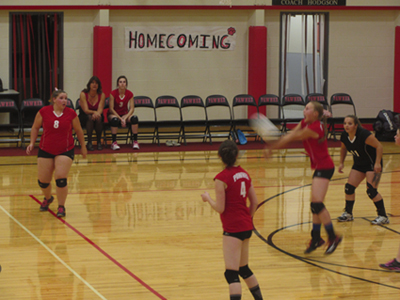 On Thursday October 5, the Pawnee Coyotes hosted the Prairie Mustangs. Coach Mary Burson said, "The girls played very well. They even were ahead of Prairie a few times. It was probably the best game they have played even though they fell short of the Win." Jaycie Hahn and Shelby Hoffman played the net aggressively. Missy Cline had some nice tips along with Erin Ellis. Rhiannon Mowery as always scrambles for everything and did not do any slacking last night. Everyone did well on their serves. 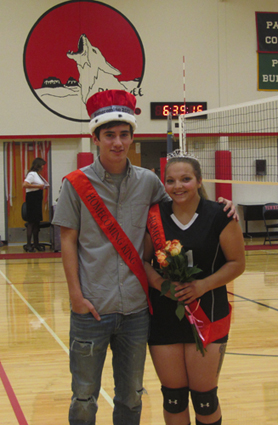 October 6 was the Homecoming game and it was a very special night when the Pawnee Ladies hosted Longmont Christian High and Pawnee won in three matches. Several volleyball players and Mr. Chambers played their horns for the National Anthem. The Pawnee Band, directed by Mr. Chambers is mostly Junior High and some fifth graders with two high school drummers. They played the school song and other songs several times and played a few notes every time the girls scored plus adding cheers for them. The band was enjoyed by all who attended the game.

Coach Mary Burson stated, "Totally awesome. I was so proud of the girls. They showed the fans and themselves that they have talent and can play well together as a team. Everyone was talking on the court; they kept their energy up and took home a big Win! Shelby, Jaycie, Malauriane, Erin, and Missy all played the net aggressively and had some outstanding blocks and tips. Rhiannon as always was there to dig the volleyball and make some great attacks and saves. Erin assisted in a wonderful save. Gracie stepped up and overcome her nerves and played well."