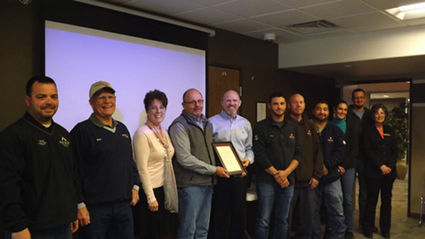 Today November 7, 2017 Mayor Allen Curtis, for the town of Pine Bluffs, proclaimed the week of November 13 thru 17, 2017, Pine Bluffs' apprenticeship week. This year marks the 80th anniversary of the National Apprenticeship Act, signed by President Franklin D. Roosevelt on August 16 1937, which established the apprenticeship system. This act has shaped skill training, for generations of american workers. Apprenticeship continues to provide state of the art training. It uses a "earn while you learn" model of academic and technological instruction training. The result of the aid of on the job training results in a national recognizable occupation, for Wyoming workers ensuring a higher earnings as well as a skill force for employers, workers and unions.

Mayor Curtis said "It is his pleasure to bring awareness to the apprenticeship program, which is a very good training tool."

The town of Pine Bluffs has partnered with High West Energy's journeyman electricians apprenticeship program. The goal of this joint effort, will be an opportunity for Pine Bluffs to acquire a journeyman electrician on staff. Michael Broad with the office of apprenticeship for Wyoming is pleased that the town of Pine Bluffs and High West Energy has come together to establish the apprenticeship combined program. "New model taking place in the state of Wyoming, where an industry and town come together to marry their programs into one. It is exciting for someone to be trained that might not have a journey person to mentor, " said Broad. Broad also noted, "Had High West Energy such a successful program in place when the town of Pine Bluffs approach me, I would not have been able to go to the Department of Labor to make this joint effort possible. It has also established the model for other towns in Wyoming to do the same."