Christmas at Home is coming 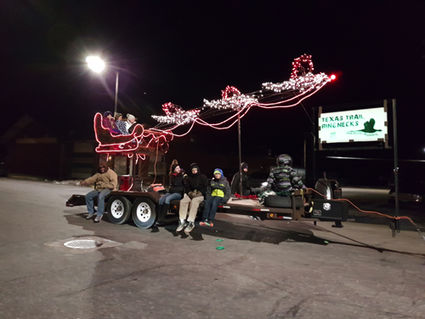 "Christmas at Home" December 4 this year. The theme is "The Polar Express." The program will be at the Community Center, located at 708 Lawson Street, the parade will start at 5:00 p.m., starting at 2nd and Main Street, going south on Main finishing at the Community Center by way of 8th Street. There will be a chili dinner, crafter will sell their treasures, and a silent auction will take place in support of the Mayor's Scholarship Fund and the Good Samaritan Fund. A few of the local business will be hosting opening house during the daytime. 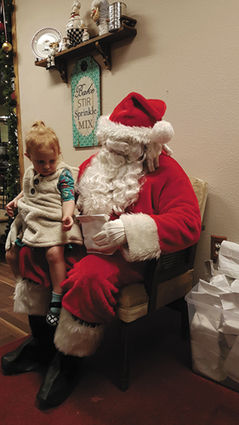 Santa get a visit from Kennedi Schnell

One of the features this year will be the revision of Doc Morris registry. Doc Morris did not start his Santa registry until 1926, when he took it over from Ray Parrish, publisher of the Pine Bluffs Post at the time, according to an excerpt from "A Country Doctor" by Martha Thompson. Per the article Doc Morris had criticized Parrish for the distribution of the candy and the "Santa" being in street clothes at the Union Pacific depot where the event was to be. The candy was provided by Pine Bluffs Bakery. It seems that some of the 100 children that showed up for the big day, received several of the boxes of candy and some didn't get any! On the following years, Doc Morris had the treats distributed at his office. At that time the children signed a registry when they sat down to talk to Santa Claus, regarding what they wanted for Christmas. The children can again note their wishes, while they chat with Santa. The registry will be on display at the Community Center on December 4, as well as at the Texas Trail Museum, during May through the end of September of each year.