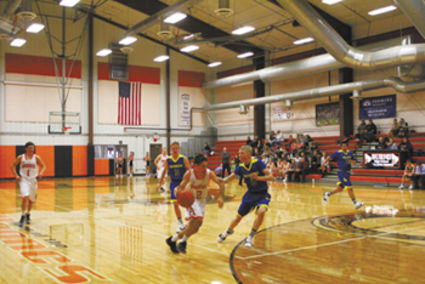 Burns Raul Hernandez #2 drives for the basket against Shoshoni defender.

The Burns Bronc Basketball Varsity team started the tournament with a bang. Taking the first 2 games but losing the last 2. Coach Patterson said, "We learned a lot about ourselves this weekend, this was another great learning experience for our team".

The first game pitted the Bronc's against Moorcroft. At the end the Broncs came out on top with a score of 54 to 41. Tyler Norris, number 22 was the leading scorer with 19 total points. Tyler shot 6 for 9 from the field. He was 1 for 1 in the 3 point range and 6 for 12 from the free throw line. Jack Ickes number 2 was second with 8 total points. He went 3 for 11 from the field and 2 for 5 from the free throw line. Three other team members had 6 point each. Aiden Carroll (#1), Wyatt Ebben (#4) and Keenan Manlove (#21). Coach Patterson said of this game, "It was awesome to see the guys flying around and diving on the floor".

Game 2 saw the Burns Broncs facing the Shoshoni Varsity Team. The Bronc's came away with their second win in the tournament with a score of 41 to 35. Leading the way again was Tyler Norris (#22) with 18 points. Number 22 went 4 for 10 from the field with 3 for 8 in the 2 point range and 1 for 2 in the 3 point range. He also went 9 for 12 from the free throw line. Tyler also had 9 rebounds in the game. Wyatt Ebben (#4) was the second leading scorer with 6 points. Wyatt went 2 for 4 from the field with 1 for 2 from the 2 point range and 1 for 2 from outside the ring. He was also 1 for2 from the free throw line. Additionally, two other members had 5 points each, Jack Ickes (#2) and Keenan Manlove (#21). Keenan was the number 2 leading rebounder in this game with 8. Coach Patterson said of this game, "We had to get several defensive stops down the stretch and execute in bounding the ball against pressure defense".

Game 3 ended in their first loss. The Broncs faced the powerful Wyoming Indians in a game the ended in 39 to 76 loss. The Indians finished the first half with a 10 point lead 32 to 22. They came out firing in the third and fourth quarters outscoring the Broncs 44 to 17in the half. For the Broncs Wyatt Ebben (#4) was the leading scorer with 10 points, followed close by Tyler Norris (#22) with 9 and the Keenan Manlove (#21) with 8 points. Tyler Norris (#22) led the team with 7 rebounds with Keenan Manlove (#21) grabbing 4 rebounds. Coach Patterson commented on this game as "we struggled to take care of the ball against the Wyoming Indians. There were a lot of lessons to be learned and situations that we can address immediately in practice this week".

According to Coach Patterson, "We learned a lot about ourselves this tournament and weekend".

The Pine Bluffs Hornets were able to show case their awesome talents over last weekend in the basketball tournament. On December 7 the Pine Bluffs Hornets started with a win over the Wyoming Indians with a score of 71 to 55. Although there were no stats on the game it looked to be a solid performance by the Hornets.

The second game against the Little Snake River Rattlers was even better. The Hornets won by a score of 76 to 38. The defense proved to be too much for the Rattlers to handle and never really allowed them to get going. The Hornets offense seemed to be able to score at will. Great games by the Hornets.

Although there were no team or individual stats available at the time of printing it is very evident by the scores that Coach Will Gray has his team primed and ready for another championship season.

The Pine Bluffs Lady Hornets Basketball team play in the tournament last weekend. They had a rough start but rallied in the final 3 games to come out with a 3 and 1 record for the meet. Coach Forbes had the girls primed and ready for this contest.

The first game was against the Snake River Varsity Girls Team. Snake River was all set for the game and came out with the win. Final score was 57 to 25. The Lady Hornets were out scored in the first half by 18 points with a score of 31 to 13. Unfortunately, the second half was not much better as the Snake River team outscored the Hornets 26 to 12. This would be the Lady Hornets only loss. Torri Long (#12) would be the team's leading scorer with 9 points. Torri hit 3 field goals and 1 three pointer. Dylan Sweeter (#44) would be a close second with 6 points and Kammie Ragsdale (#20) with 5 points rounded out the top 3 scorers.

Whatever pep talk Coach Forbes gave the girls between the games must have been a strong one. In the second game the Lady Hornets dominated the Moorcraft team 53 to 35. Coach Forbes had to be proud of the way that her team came back. Leading the way this game was Kammie Ragsdale (#20) with 19 points. Kammie hit 7 field goals and made 5 of 11 free throws for the team. Torri Long (#12) and Paige Thompson (#42) each had 8 points. Each hit 3 field goals and 2 free throws. Right behind them was Hyleigh Fornstrom (#22) with 7 points. She went 3 for 6 at the free throw line and hit 2 field goals.

Game 3 pitted the Lady Hornets against the Saratoga Girls Varsity Team. The girls still pumped from their last win were ready to hit the floor. For their efforts the Lady Hornets came out with their second win over Saratoga with a final score of 48 to 22. Scoring 24 points in both the first and second half of the game the Hornets defense only allowed the Saratoga team to score 10 points in the first half and 12 points in the second. Leading the way in this game again was Kammie Ragsdale (#20) with 17 points. Kammie hit 8 field goals and 1 free throw. Both Hyleigh Fornstrom (#22) and Dylan Sweeter (#44) hit for 8 points each. Hyleigh went 2 for 5 at the free throw and hit 3 field goals while Dylan hit 4 field goals. Torri Long (#12) hit 3 field goals for a total of 6 points and Kayla Thunn (#45) went 1 for 2 at the free throw with 2 field goals for a total of 5 points.

The fourth and final game would be the closest of the 4 games. But the Lady Hornets pulled out their third win of the tournament with a 41 to 30 win over the Wyoming Indians. The first quarter ended in a tie 8 to 8. In the second quarter the offense got moving and they out scored the Indians 14 to 4. The half ended with the Lady Hornets in a comfortable lead 22 to 12. The third quarter was pretty closely matched as the Lady Hornets scored 8 points to the Indians 7. The Lady Hornets finished the fourth quarter with 13 points to the Indians 10. Kammie Ragsdale again led the team with 10 points. She had 1 three pointer and hit 7 of 10 free throws. This gave Kammie a tournament total of 51 points. Two of the Lady Hornets had 7 points, Hyleigh Fornstrom (#22) and Kenzie Graves (#31). Kenzie went 5 for 5 from the free throw and hit 1 field goal while Hyleigh went 5 for 6 from the free throw and hit 1 field goal. Dylan Sweeter (#44) contributed 5 points by hitting 2 field goals and going 1 for 6 at the free throw.