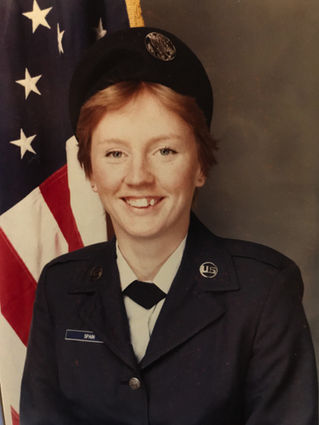 Jo E. Radcliffe comes from a military family. Her grandfather, and father both served in the U. S. Navy. Serving in the military, was a given in her mind and heart.

Radcliffe, is born and raised Californian. She graduated from Baldwin Park High School, in Baldwin Park, California in 1978. Upon graduation, she entered the work force. She worked for Bank America Card in Pasadena, California, and for a law firm in Los Angeles. This was not enough in her eyes, as she was looking for the right job and what she was doing at the time, did not fulfill her goals.

Radcliffe entered into the military in 1982, and headed to basic training in Texas. From basic training at Lackland AFB, she headed north to Shepard AFB for tech school. She would find herself in aircraft maintenance on the F4s. She was on the crash and recovery crew. "In all my time serving, I only had to go out once for crash and recovery" she said.

Upon completion of tech school, Radcliffe was sent back to California to be stationed at George AFB, in Victorville, California. This was a short distance from home and her husband.

"My career in the military was shortened as I got out when I became pregnant with our first son." said Radcliffe. "This was a decision that was right at the time, but when I look back, I think I would change. It was what we did then." she added.

Radcliffe, was then the military spouse, traveling with her husband, who was also active duty Air Force. "His duty stations took us from California, to Chanute AFB in Illinois, back to California, then to England, finally settling at FE Warren AFB, at Cheyenne, Wyoming." Radcliffe stated. 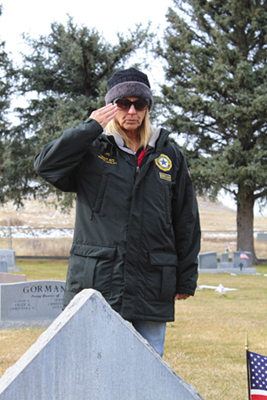 Being at FE Warren, gave Radcliffe an opportunity to work on base for a while in base housing. From there she went to work for Weatheriztion. While she is "semi-retired", Radcliffe does fill in from time to time at the Pine Bluffs Rest Stop, and is an active member of the Donald Eisenhauer American Legion Post 60. She is one of the honor guards, and is strong in her help to veterans and their families.

"While my time in active duty was short, it was life changing and lasting" she said. "Anyone thinking of entering into the military will get a training and education that is irreplaceable. Not only will they receive training, and education, they will have the benefits that go along with it. For example, confidence, security, and a comradery that lasts a lifetime." Radcliffe stated with conviction.