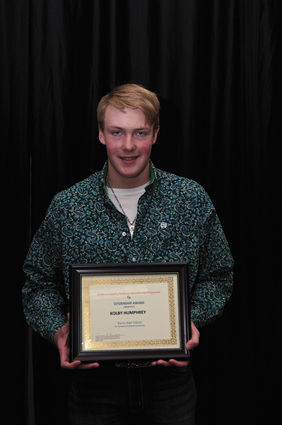 Burns High School senior Kolby Humphrey stands with the Laramie County Retired Education Personnel Citizenship Award that he received Monday in Cheyenne. The award is given to a senior from each high school in Laramie County.

So he contacted his mother who reached out to Burns High School faculty.

It wasn't spam, nor was it fake.

Unbeknownst to Humphrey, the Burns High School staff were paying attention, and they picked up on Humphrey's high level of involvement both at school and in the community.

Awarded to a senior from each high school in Laramie County, the LCREP Citizenship Award is given to students who are highly in...