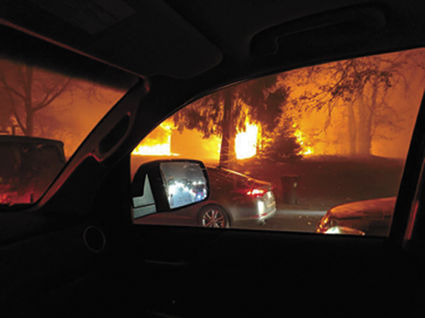 Former Pine Bluffs resident Rick Scott's view as he escaped the Camp Fire near Paradise, California. Scott and his wife both narrowly escaped the blaze which was the deadliest in California history. Before moving to Paradise, the Scotts lived and worked in Pine Bluffs.

November 8 started out just like any other for former Pine Bluffs residents Rick and Shelle Scott.

By the time it ended, they had both made harrowing escapes from the most destructive wildfire in California history.

When Shelle dropped their two daughters off at school that morning, she noticed a not-so-distant smoke plume.

When she arrived at her job, Shelle's coworkers were closely monitoring the rapidly growing fire.

"I turned right around and went home."

Meanwhile, Rick was at a work meeting at Northwest Lineman School in Oroville, California when he noticed a large smoke plume nea...