USO and Christmas away from home A Veteran's Story 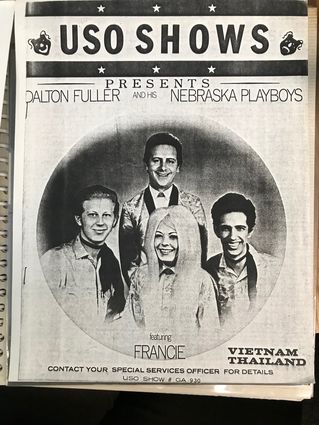 Above: poster for the USO Show of Dalton Fuller Band and the Nebraska Playboys.

Veterans have served many months and years away from home. Leaving their families is hard, but being in a foreign country during the Christmas season is sometimes more than unbearable.

It is times like this many Americans have stepped up to the plate, or shall we say the microphone and brought joy and laughter to our overseas troops. To the orient to the South Pacific to the middle east and more, entertainers have jumped on planes, ships and trucks to go on tour and bring some home entertaining to our men and women in uniform.

The United Service Organizations Inc. (USO) was founded in February of 1941. It's purpose was to strengthen America's military service members by keeping them connected to family, home and country, throughout their service to the nation.1

One of the most memorable and longest performers for the USO is Bob Hope.

Hope began entertaining the troops in May 1941 and continued this great service to many troops around the world for nearly fifty years.

He was presented the Presidential Medal of Freedom, in 1969 by President Lyndon B. Johnson.

While there were many Hollywood entertainers "serving" entertaining, a touch of home and Americana, many bands, and other entertainers from across the states were in the USO to serve our troops.

One such USO member was Dalton Fuller.

Fuller, a local musician, veteran and member of the Donald Eisenhauer American Legion Post 60, spent time in Vietnam entertaining our troops right along side of Bob Hope, Sammy Davis Jr., and Dean Martin to name a few.

Fuller, originally from McCook, Nebraska, took his Dalton Fuller Band and the Nebraska Playboys on tour. He served several tours overseas, and even played for King and Queen of Thailand.

Fuller still entertains today. He can be found at the Pine Bluffs Senior Center performing for a local dance on the first Sunday of each month.

Many veterans in the area come and join in on the music, dancing and potluck.

He can tell you how important it is to keep the moral of the troops up.

Such is true with today's soldiers overseas. Here is a statement from retired Air Force veteran, Jim Merryfield who is serving in Bagram, Afghanistan.

"Greetings my fellow Pine Bluffs residents from the deserted wilds of Afghanistan. The weather is finally feeling like winter as rain and ice start to come more often. Temperatures have dropped into the low 20's at night and cloud cover is more prevalent. As the song goes "its beginning to look a lot like Christmas:". As military and civilian alike prepare for the Big 2 as we call them here (Christmas and New Year) we recall the past holidays and how they were spent.

Some of the most memorable times here are spent in the work place or at around the dining facility tables reminiscing on the fun times that filled each other's memories and ability to pass them on as if we were experiencing them again. Listening as to how our German and British brothers and all the others spent their holidays in past years, sharing the times and traditions that we all have, seem to make the distance between us and our families not feel so far. It seems that all people, no matter where they are, from have similar traditions. There is always a Santa Clause figure, Present opening event and a single dinner where everyone comes in the spirit of the season and joins in on the feast. Makes the world seem a bit smaller when we share these experiences. 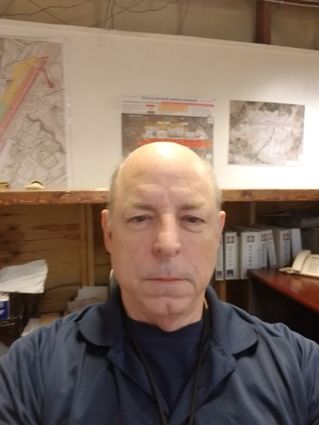 The holidays are not wrapped around presents or seeing what Santa brought or what will be on the table this afternoon, but rather getting everyone together just talking and having a good time with our fellow soldiers/airman/contractors. The stories and traditions are as varied as the number of people that we have at the gathering. The folks at the dining facilities always put on a good dinner and nice spread but I don't think that there is a person here that would not trade any of this for the day at home.

Separation is hard, especially during the holidays but one thing that I have learned. It is not the gifts or the tree or the decorations that make the holiday season. It's family and friends that you love and support that truly make the season a joy. I have been truly blessed with a wonderful wife, 4 great kids and 6 incredible grandkids in my life. The support of friends seems to be without limits. So no matter where I am I know that I will have a joyous Christmas.

So to my family, friends and loved one's I wish all of you a Very Merry Christmas and Happy and Blessed New Year. I can't wait to see all of you soon. Take care and God Bless each and every one of you."