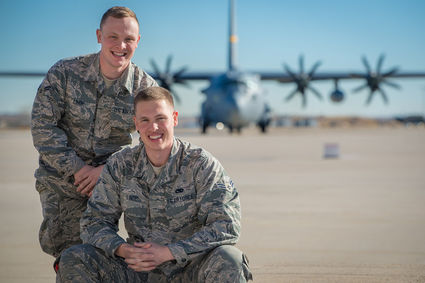 Airmen 1st Class and brothers Christian (left) and Harrison Linde are both crew chiefs in the Wyoming Air National Guard's 153rd Airlift Wing. The brothers went through basic and advanced training together.

CHEYENNE, Wyo. - When your father has spent the last 35 years dedicated to military service, following in his footsteps by joining the Air Nation Guard is hard to shake.

Despite claiming he would never join the military, Airman 1st Class Christian Linde found himself on the journey to become an American airman and was lucky enough to have his younger brother, Airman 1st Class Harrison Linde by his side for the entire experience.

For many people, the idea of working alongside a sibling may not be their idea of fun. For Christian and Harrison, starting their military careers and serving side...