Prisoner of War/ Missing in Action 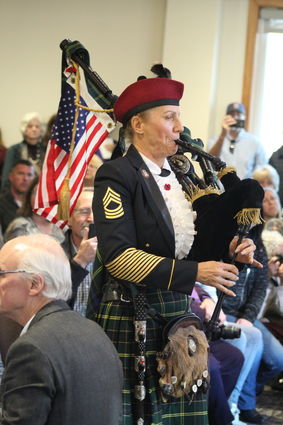 A celebration of honor was bestowed 70 years later by the French to six American Veterans.

The chapel at Good Samaritan Water Valley Senior Living Resort was standing room only for the presentation of the Legion of Honor Medals by The Honorable Christohe Lemoine, Consulate of France in Windsor, Colorado.

After the presentation of the colors, Marti Mace, a member of the American Legion Francis E. Self, Post 6, Cheyenne, Wyoming played the bag pipes. As she entered she was playing the Lord Lovets Lament followed by the God Bless America.

The ceremony's opening remarks were made by Lieutenan Colonel Frank Huffman and in the introduction of the recipients.

Presented first was LT Leila Morrison. Morrison served as a combat nurse with the 118th Evacuation Hospital. Her duties were in the pre-op section, keeping the soldiers alive for surgery. The hospital was located at Buchenwald concentration camp and was liberated. During that time she cared for prisoners as well.

LT Armand Sedgeley was a B17 Bombardier with the 340 Bomb Squadron, 97th Bomb Group, 15th Air Force. During a mission, his plane was shot down and he had to ditch into the ocean near the coast of Corsica, France. 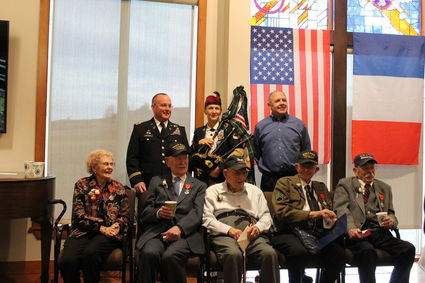 Third to be presented was 2LT William Powell. Powell was a B24 pilot with the 764th Bomb Squadron, 461st Bomb Group, 15th Air Force. During his 10th mission, a neighboring plane was hit, and shrapnel from that plane hit Powell's taking it down. He would find himself a prisoner of war for the remainder of the war in Stalag Luft 1.

SSG Phillip Daily was next in line to be presented the Legion of Homor medal. He was a B17 tailgunner with the 772nd Bomb Squadron, 463rd Bomb Group, 15th air Force. Daily was on his 25th mission and was shot down. He spent the rest of the war as a POW in Stalag Luft 4, and survived the Winter March of prisoners.

SSG Harry Maroncelli was last to receive his medal. He was a Ball turret gunner on a B17 with the 615th Bomb Squadron, 401st Bomb Group, 8th Air Force. Maroncelli would surpass all odds and complete his required 35th mission.