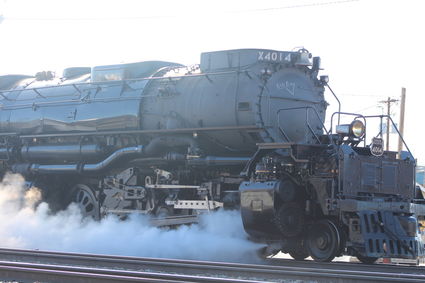 Above: Big Boy 4014 steams into the depot in Cheyenne.

In 1868 a small out of the way spot was designated Rock Ranch. It was made up of a tent, a slab shack with a chimney, and one square shed. One year later this would become Pine Bluffs. By 1884 Pine Bluffs would become the largest cattle shipping point of the Union Pacific (UP) Railroad at its peak running over 800,000 head of cattle through the Texas Trail. A constant visitor to the station was the last steam engine built for the UP Railroad, the Living Legend #844. In a cloud of steam and the shriek of a whistle a historic moment was witnessed by thousands at the Cheyenne Depot on Saturday...