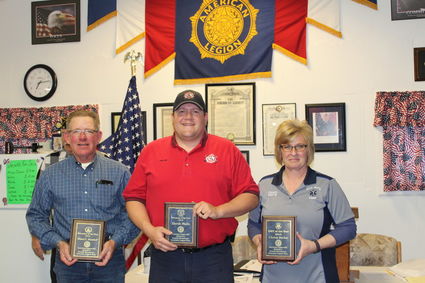 "Having three winners selected from our post is an amazing accomplishment for our first time submitting candidates in the numerous categories." said Commander Wise. "We submitted some and of the ones submitted with the other Posts in the district, we were thrilled with those chosen." he added.

Local fire chief Derek Walls was awarded Fireman of the Year for his many accomplishments while serving district five. Taking home EMT of the Year was Christy Barker for her tireless efforts, and finally Donn Randall, our local councilman, who taught for over 26 years, took home Educator of the Year.

All three are now eligible for the Department of Wyoming American Legion awards. They will run against the winners of all the other Districts and will know in June if they will take those home as well.

Congratulations to all of our winners, and here's hoping for your continued success.