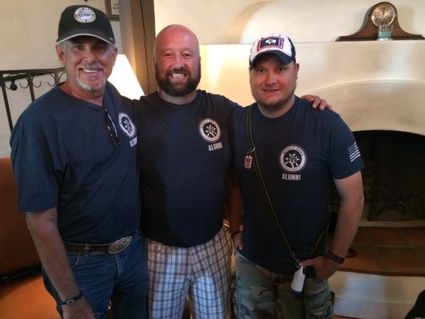 Every day in this country twenty to twenty-two veterans commit suicide because they can no longer deal with the turmoil that is going on inside of themselves after their service. In this day and age we hear the letters PTSD more and more as we continue to fight overseas. Veterans come home saddled with anger, hopelessness, and a general sense that they are warriors, and as such, are not allowed to ask for help. The Downrange Warriors, a program designed to prevent suicide, are trying to change that one veteran at a time.

An idea conceived by Dana Sanders, who then brought in Todd Bray and Jesse Fauber, the Downrange Warriors believe that the only way to heal the moral wounds of our soldiers is to face them head on with someone else who has been there too. Downrange Warriors is a faith based program that deals with victims of post traumatic stress. Refusing to believe that this condition is a disorder, these men believe that the cause of PTS is an underlying moral wound. An anger at God, or whomever you believe created the universe, because of the trauma you've experienced. How can God allow something so terrible to happen? What some of these men and women don't understand is that they are having a normal reaction to an abnormal situation. They also have a debt. Those men and women who did not have the ability to come home expect those of us who did to live the best life that we can.

The Downrange Warriors is made up of three arms. The first is the activity section. Got Your Six Outdoors (GY6O) is an organization led by Jesse Fauber that holds an outside activity every month. Whether it be hiking, ATV's, picnics, or paddle boarding GY6O starts by getting the veteran out of the house with other veterans. Many people who suffer from PTS will do what Todd Bray calls an isolation spiral. "They realize they're different, they assume it's their fault, and they start to self-medicate." Said Bray. Getting the veteran out of the house, into the sunshine, and doing something that gets them with other veterans is a vital part of the healing.

The second arm of the program is the Mighty Oaks program. Founded by Force Recon Marine Chad Robichaux, this program is led by combat only veterans and consists of a five day intensive program. Veterans are isolated on a mountain where intense self questioning begins to help vets come to terms with not only combat trauma, but life trauma as well. The Downrange Warriors and the Mighty Oaks programs understand that vets, according to Bray, "Need help from a veteran that has the credentials to participate in the conversation." The hope is that seeing others survive moral wounds will give a vet hope that they too can survive.

The third arm of the program is a twelve week program called REBOOT. The main difference between this and the Mighty Oaks is not just the time frame, but the participation. While the Mighty Oaks is just the veteran along with other brothers and sisters, the REBOOT program is designed for the veteran and their spouse or significant other. Understanding that the family suffers from PTS as well is an important factor in the healing process.

The Downrange Warriors are not counselors. They don't have credentials, and they aren't doctors, but what they are is experienced veterans. Seasoned men who have lived through their own battles and come out victors. Trauma happens during combat, men and women see things that most people can't even imagine. This trauma is often compounded by poor decisions that are being made when the vet returns home. The Downrange Warriors are trying to combat this trauma by replacing horror with positive actions. This program started two years ago with one civilian and two vets helping one troubled veteran, and has expanded exponentially over this time.

Bray would like readers to know that this program is completely free. These men will offer transportation, babysitting, and camaraderie to our brothers and sisters of service. No matter what your faith, or lack there of is, this program is working. According to Bray, "There has not been a veteran suicide in our county [Park] since we started. We believe that we have prevented at least nine suicides." It has grown to the point where oftentimes judges accepting plea agreements from veterans will often include the program as part of the agreement.

If you or someone you know is suffering from PTS, or if you would like to learn more about this program, you can contact the Downrange Warriors for help at http://www.downrangewarriors.org. If you would like to help or partner this program that information is also on this website. Bray would like readers to know that at this time all work through the program is on a volunteer basis, and there are no admin costs for running this program. What that means is that every donation, pledge or contribution goes 100% to the vet. What an amazing gift to give those who have sacrificed so much.