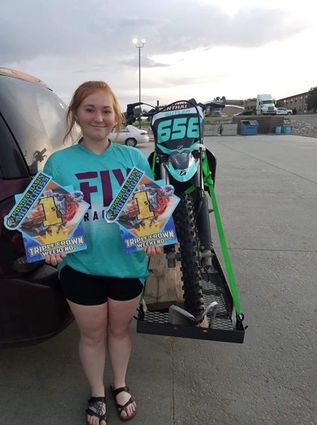 Above left: Anna Butler holds her trophies for her victory.

17-year old Anna Butler is as fearless as they come. For the last four years she has been riding her Kawasaki motorcycle in Kicker Arena Motocross despite a few injuries and crashes. Butler races with the Tri-State Dirt Riders Motocross Association and has won several tournaments including the Gillette Triple Crown. She has ridden in races all over including Denver, Loveland, Amarillo, and Gallup, and is looking to constantly better her time.

Since discovering racing Anna has devoted much of her time to the sport although she had to take some time off after tearing her ACL. Anna had a little fear after returning to her bike after her injury but she stated. "You can be scared all day long, but once you start riding it just goes!" Anna continues to push herself to go faster and faster. Ultimately she would like to qualify for the Loretta Lynn Race. "I don't think I'm fast enough now, but I just keep riding." Anna stated.

The only other thing that Anna is as devoted to, is her family. Anna has an almost two-year-old girl named Haley, and a significant other named Isaac Carroll who also races. Anna sees her daughter on a motorcycle by the time she's four. Hoping that the family that races together stays together, Anna will keep pushing herself to be better while taking care of those she loves.