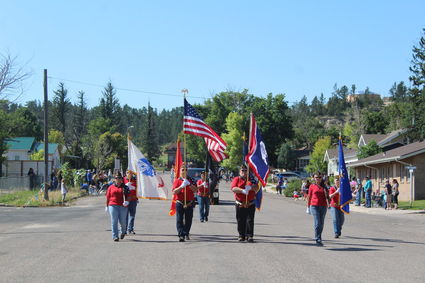 Above right. The Honor marches down Main Street with their patriotic float behind.

Residents of Pine Bluffs started lining up early to watch the 69th annual Trail Days Pathways to the West parade. Lead by the local Donald Eisenhauer Post #60 American Legion Color Guard, the parade gave residents a chance to see some of their neighbors and collect some candy.

The lions Club was in the park completing one of their annual service missions as they served a brisket, hamburgers, and hot dogs to hungry locals and visitors alike, and several vendors pitched their tents in the park. The Trail Days Committee judged all the parade entries and winners were as follows: