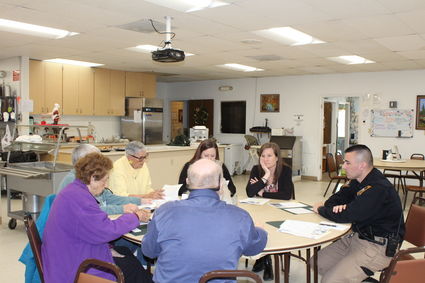 Above: Sarah O'Donnell, and Natalie Collins of Edward Jones', and Chief of Police, Chance Walkama listen to local citizens concerns on scams.

Scammers will take advantage of anyone that they can, and oftentimes that means the elderly. On Friday, December 13th, the Pine Bluffs Senior Center hosted Edward Jones' Natalie Collins and Sarah O'Donnell in an attempt to educate locals on some of the scams that are out there. Getting taken advantage of is awful at any time of year, but sometimes the holidays can make it even worse.

Edward Jones estimates that as many as 145 million people have their identities stolen each year. For the elderly, that means that one out of every twenty are victims of financial abuse, and as discussed in a...