Burns to have new chiropractic and acupuncture business 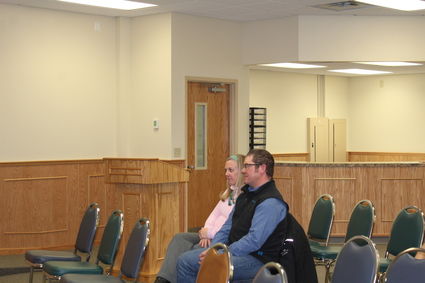 Above: Dr. Kayla Madler and her husband Trevor address Burns council about their business.

Monday evening's town council meeting in Burns introduced a new business coming to the area. Dr. Kayla Madler and her husband Trevor are planning on moving to Burns from Cheyenne and Dr. Madler would like to bring her chiropractic practice with her. The Madler's are planning to rent the north building for her chiropractic and acupuncture business. For the time being Dr. Madler is planning on being open around two days a week, and are hoping to expand from there.

Ambulance director Jeff Bartels reported that there were 22 calls in January with a 44.9 percent response rate. Bartels informed the council that the standard operating procedures (SOP's) were being finished after last meetings approval and that personal vehicle (POV) letters were coming in from various agencies and were being filed as they came in. This is good news for those EMTs who were unable to continue using their POVs for responding to calls.

Bartels also reported that the Corona virus is not a concern for Wyoming at this time. While there have been over 200 deaths reported in China, there have been no deaths, and only 12 cases reported in the US. Bartels reminded council that normal flu precautions should be followed and that that should be enough protection here. Remember to follow standard hand washing procedures, cough into the elbow instead of the hand, and try to avoid heading into public areas if you think you are sick. Corona virus presents much like the flu, so if you are experiencing any of the following symptoms, head to your doctor. Symptoms include headache, fever, cough, and sneezing.

Mayor James Clark reports that the interior wall of the town hall building is deteriorating. The outside sidewalk has started to settle and it's causing a crack about 3/4 of an inch wide. According to the mayor this will need to be fixed before it gets worse. Clark also reports that there are a couple people who may be interested in renting the restaurant that is part of the back corner of the building. Clark introduced a motion to spend approximately 6000 dollars of the town's six-penny money to complete upgrades to the building. The motion was seconded and unanimously accepted.

Finally, bids for the cleaning of the town hall were opened and discussed. A motion to accept the bid of the current cleaning person was put forth and seconded. The council unanimously accepted the bid and signed a one year contract. Mayor Clark asked about extending the contract to a two or three year contract, but council thought it better to keep it at one year.

Council would like to remind residents that the town offices will be closed on February 17 in honor of President's Day and the next council meeting will be on March 9. All residents are encouraged to attend each meeting.