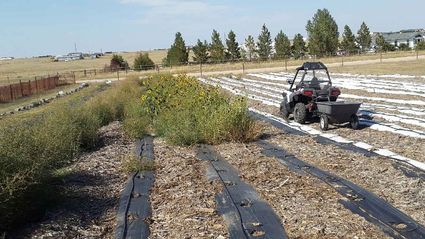 Above: Weeds over taking lavender field are "weeded out!"

We love it! The clean air, unobstructed views, nothing between us and the North Pole but a few fence posts, and the beauty of the starlit night sky amplified by the lack of artificial light. That's country living at its best. But, there's a lot more to it than just the beauty and the wonder of it all. There is a lot of hard work and not just a few hindrances that thwart our enjoyment. Some are just part of life and others...well...others can be our neighbors. There are some common courtesies that come with living in the country that simply make good neighbors better.

One of the great things about living in the country is having that piece of land, big or small, that belongs to you and having the right to do what you want on that land. It's much easier in the country than it is in town. We don't have all the restrictions and requirements that townsfolk have. For example, I listen to many residents of Cheyenne after a significant snowstorm talk about the ordinance for snow removal. They have to shovel the snow off the sidewalks the morning after a snow event or be fined by the City. So, people have to getup extra early or miss work to get the job done. Then the snowplows come by and bury their driveways that they had just cleaned off and they get to start all over again. Living in the country is great. First, we don't have to worry about sidewalks because we don't have them. We do have to take care of snow removal, but it's on us, not somebody else. If it isn't significant, we probably won't move it at all. Or either we'll clean out just enough to get the car out or feed the livestock. Then we just let God's snow removal plan go into effect. The sun. And guess what? Nobody is going to come around and write us a ticket for not clearing the snow. The other side of that coin is that it is on us to clear the snow. That can be a daunting task at times. If we need to get to work, we have to get out somehow. That's why so many country folk have at least a small tractor or other snow removal implement. Sometimes several neighbors along a road will get together to clear the road and help each other out. That's what country living is all about. Neighbor helping neighbor.

Having land also comes with responsibilities. It isn't just about doing whatever you want on your property. Good neighbors take each other into consideration when they are making decisions about their property. Just because you can do something doesn't mean that you should do it. There is nothing that tells me that keeping my place cleaned up is required. But I do because it's the right thing to do. Not cleaning up and letting trash and clutter build up invites varmints in to live by providing habitat for them. Those varmints include skunks, which can carry rabies. Several cases of rabies were detected in skunks just across the border in Colorado last year. Excessive clutter and trash also create fire and safety hazards and reduce property values, not just for the property owner but also for the neighbors. Improperly stored chemicals may leach into the ground and then to the drinking water. The same goes for septic systems that aren't maintained properly. That's some of the responsibilities of country living. "Look out for your neighbor" could be considered the golden rule of country living. You may need them to look out for you one day. I've seen far too many people move to the country from the city, thinking about all the good things that come with country living yet they bring the city with them. I know it's all about habits and comfort zones and such, but they bring the very things they're trying to get away from. Light is my greatest pet peeve. It's much better now, but there was a time when nearly all my neighbors had very bright lights around their houses that blotted out the night sky. Not a few of them complained because they wanted to be able to see the stars but there was too much light. They didn't understand. I understand that they didn't feel secure in the dark, but their lights were the reason they couldn't see the stars. Most of them have either come to realize that dark isn't always bad or they couldn't take living in the country and moved away after just a couple of years.

There are also good land management practices that we should all exercise. Mowing your entire acreage to keep it short isn't good for the land. The longer grass will help hold snow in the winter and keep it on the pasture where it'll be used in the spring as the grasses begin to come out. Longer grass also keeps the ground cooler to protect the root systems to allow the grasses to continue to grow and thrive. Perennial grasses can have roots that go down six feet or more. Cutting them short causes the roots to shorten and move up. The shorter they are, the harder it is for them to get to water. Shorter roots make the grass less drought resistant and more susceptible to weather damage and stress. Wind has a greater tendency to blow the topsoil away with shorter grass. Mowing greatly enhances soil damage by wind and water that longer grass would prevent. In Wyoming, we have several ground-nesting birds that rely on long grass to nest and raise their young. Mowing destroys their habitat. Catherine Wissner, Laramie County Horticulturalist, made a comment at a seminar I attended last week that resonated with me. It is so simple that I should have thought of it myself long ago. Simply put, anyone with pasture, even a small pasture, should think of themselves as a grass farmer. If we thought of our grass as a crop, we would take much better care of it.

If we thought of grass as a crop, overgrazing wouldn't be the problem it is with small acreages. Many people move to the country just so they can have horses. What they don't realize is that it takes about 40 acres to feed one horse on pasture under ideal conditions. Some of these people are from the coastal regions where grass can almost be a nuisance and simply don't know any better, but they try to feed a horse (or multiple horses) on a five acre lot without supplemental feeding. It won't work. About all it will do is starve the animal. Not good. Besides the animal's health, another problem with overgrazing is that it destroys the pasture. A horse is the ultimate mowing machine. When they eat the grass away, nothing is left to protect the soil and it blows away, gets too hot to allow grass seed to germinate, and weeds will move in and take over. All bad situations.

Country living is great. To make it even better we should all pay close attention to our property and be willing to help your neighbor with his or hers. If you've been in the country for a while, you already know everything I've said and could probably add a book of your own. If you're new to the country, slow down and learn how to live here. Country living is great, but it isn't city life. Out here, neighbors often have to rely on each other. Be courteous to everyone around you, give a helping hand and be willing to accept a helping hand, watch out for your neighbor's interests whenever you make a decision for yourself. It makes for good neighbors. My wife and I have a saying that resides on a plaque in our dining room, "A day in the country is better than a month in town". That's certainly the mantra for country dwellers.

If you have a question or just want more information about horticulture or gardening, ask a Master Gardener. It's what we do.