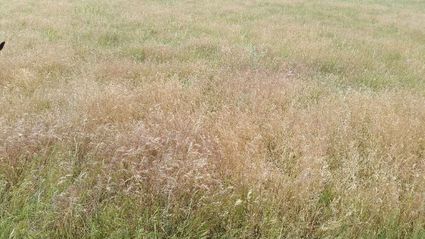 Sometimes it seems like that, doesn't it? Weeds, weeds and more weeds. Every time we turn around weeds are just growing everywhere. I guess we can thank Adam and Eve. When they got themselves kicked out of the garden, God told them that they would have to contend with weeds. They've been with us ever since. And now we're getting into the weed season.

If you have been out walking around your yards or checking your fields, you probably noticed that cool season grasses are starting to come up. Cheatgrass is one of those cool season grasses. It's also called Downey Brome because it looks like a whole bunch of fluff when it ripens. Normally it will start germinating in late March to early April. Why do I pick on Cheatgrass you may ask. Because it's one of the bad ones. Maybe even the worst. Of the three noxious weeds we have in the county it is probably the most widespread. Not only is Cheatgrass prolific but it is dangerous to livestock, domestic animals and people. I had some Cheatgrass seeds get stuck in my shoe early last summer and they dug a hole in the side of my foot that is still healing. While new Cheatgrass growth is palatable to livestock, the older, dry growth can become stuck inside their mouth and cause sores that can cause the animal to stop eating. The seeds will continue to dig in unless they are removed. They are also capable of causing abscesses in animals, in both mouth and skin.

You can probably tell from the few physical issues I described above that Cheatgrass causes a lot of problems. In livestock these issues, at their worst, can cause the animal to die. That's a huge loss of income to the rancher. For domestic animals it can cause a pretty costly vet bill if the seeds aren't removed quickly. One of the big problems with the seeds is that they will be under the hair and can be hard to identify, much less find. In people, believe me, you'll know it if you get a seed stuck in your skin. It'll start out as a minor irritant, but will quickly progress to an open sore that hurts, badly. By then it is too late to avoid skin damage. Although the damage is seldom permanent, it can be painful and take a long time to completely heal.

It's much better to avoid the problems in the first place. In the field, it's nearly impossible to keep livestock away from Cheatgrass. Around the house it's possible to keep it mowed off but you'll be mowing constantly because it grows so fast. Some people have tried burning it off but there are two problems with that. The first is the fire itself. I think we all know how dangerous it is to start a fire in grass, especially later in the season when the grass has started to dry out. Cheatgrass dries out early and burns exceptionally fast and hot. It can get away from you before you realize it. In fact, it's one of our major contributors to wildfires. But there's another big problem with burning Cheatgrass. Burning releases the seeds and enhances their germination. That's precisely what we don't want.

I mentioned earlier that Cheatgrass is prolific. Not only does it grow fast in the spring, but it's one of the first grasses to come up and it's highly competitive. That means that it will choke out the good grasses and take over completely if left unchecked. Constant mowing has the theoretical possibility to keep the seeds in check, but this is only theoretical. If untouched, Cheatgrass will grow a foot or so tall. However, if mowed, it can produce seeds when it's only a few inches high. So, the theory doesn't always play out that way we want. In order to mow it short enough to make a difference you'll end up destroying all of your grass.

The only way to get rid of Cheatgrass is by spraying. Because it's a cool weather grass, it will germinate in both early spring and in the fall when the temperatures cool down. That means that you'll need to spray twice. Plateau is the weed killer of choice for Cheatgrass and works both as a pre-emergent and a post-emergent. As a pre-emergent it stays in the soil and will kill the young plant before or as it comes out of the ground. A post-emergent is applied after the grass comes up and kills the growing plant. It's best to spray either as a pre-emergent or as soon as you see the Cheatgrass coming up. The younger and more tender the plant is, the better the kill. Remember to spray again in the fall or you'll have another crop of seeds and you'll be starting all over again. One of the side benefits of Plateau is that it's one of the only herbicides that will kill Dalmatian Toadflax. Although I'm not addressing Toadflax directly in this article, it is also a major concern in Laramie County.

The Laramie County Weed and Pest Board offers a cost share to spray for Cheatgrass and Toadflax at an 80/20 ratio. That means that you're only paying 20 percent of the cost of the herbicide when you buy it from them. You'll still have to pay for the labor to apply it, but saving 80 percent, at least in my book, is a lot. Plateau is an herbicide that can be applied by anyone. Its application does not require any special training or certification. I would suggest, though, that you dedicate a sprayer to only herbicides and never use it for anything else. In fact, you may want to dedicate your sprayer to a specific herbicide so there is no chance of cross contaminating and killing the wrong plant. Be sure to read the label and follow the instructions precisely. THE LABEL IS THE LAW when it comes to both fertilizers and herbicides. So make sure you don't deviate or take shortcuts. Something else to remember is that the applicator, you, will be responsible for any overspray that may kill something on your neighbor's property. So make sure to coordinate your spraying with any property owners in the area and avoid spraying when it is windy. With wind the spray will drift to places where you may not want it. If you purchase Plateau be sure to ask any questions you may have before you spray.

Cheatgrass is one of our most noxious weeds and truly needs to be eradicated from our yards, pastures and roadsides. Everybody has to be involved. If even one person doesn't work to eliminate this problem, we'll continue to have seeds produced and the problem will continue. I realize that we'll never fully eradicate it, but we can reduce its impact if we all take an active part. So, I encourage you all to work to eliminate Cheatgrass. If you have any questions, ask a Master Gardener. It's what we do.