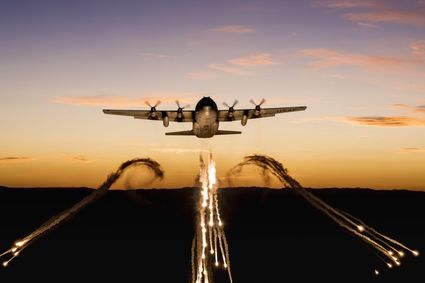 A C-130 from the 153rd Airlift Wing, Wyoming Air National Guard, fires off flares over Camp Guernsey Joint Training Center during a training mission on Sept. 24, 2019. The 153rd Airlift Wing's primary mission is to provide combat airlift to our state and nation.

The yearly competition recognizes the best work of public affairs professionals who work as broadcasters, graphic designers, journalists and photographers from across the Air National Guard.

Master Sgt. Jacqueline Marshall, a new resident of Cheyenne was named Military Videographer of the Year in the Air National Guard by the Nation Guard Bureau Public Affairs Office.