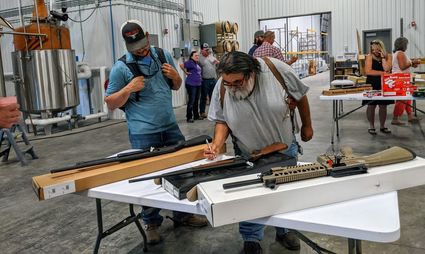 Above: Greg Ornelas of Pine Bluffs writes in his bid for one of the rifles being auctioned by the local Pheasants Forever.

The silent auction held at Pine Bluffs Distilling last week as a fundraiser for Pheasants Forever was very successful, according to a group official.

B.J. Bowman said 26 firearms put up for auction at the fundraiser were purchased.

Pheasants Forever was forced to cancel its annual banquet in April, its major fundraising event for the year, because of coronavirus.

However, the organization had already obtained firearms - including handguns, rifles and even BB guns - to be sold at the banquet. Chad Brown, president of...