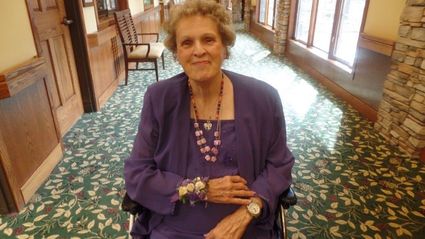 Carol E. Fyfe Goranson took her last earthly breath and was in the presence of her Lord and Savior on Friday, July 3rd, 2020 at Heritage Estates in Gering, NE. Although she had been "isolated" from family for nearly 4 months due to COVID, she was blessed to be able to have her family by her side the last 2 days of her life. A celebration of life will be at Monument Bible Church on Thursday, July 9th, 2020, 10:30am, with Pastors Jake Roberts and Jeff Banks officiating. For those unable to attend, the service may be viewed virtually at http://www.facebook.com/monumentlivestreams. Interment will be at the Kimball cemetery. Visitation will be Wednesday, July 8 at Dugan Kramer Funeral Chapel from 5-7:30 pm. Memorials may be made to Monument Bible Church or KCMI. Online condolences may be left at http://www.dugankramer.com.

Impatient to arrive, Carol was born on the river bridge near Columbus, NE on July 28, 1937, to Harold and Mae Schmid Fyfe. She was the youngest of eight kids born to this union. Carol graduated from Albin High School in 1954. She worked in Scottsbluff, NE where she chased the love of her life, LaVerne Goranson, "until he caught her." In 1960, they were united in marriage for a blessed life of 45 years and welcomed three children to the family, Elaine Francis, deceased at birth, Dennis LeRoy and DeAnna Mae. The family experienced life on the family farm in Kimball County. Carol enjoyed her life as a farm wife, tending a large garden, being a mom and helping as needed. As the kids grew, she went to work at Kimball County Hospital and later at Sidney Memorial Hospital as a medical transcriptionist for over 25 years before being forced into early retirement due to declining eyesight. She was always very proud of her career. In later years, she became involved in the Foster Grandparents program where she was blessed to be able to rock babies in daycare facilities in Kimball, Scottsbluff and Gering. For a period of time she sat on the Foster Grandparents Advisory Board. Carol was ordained as a Stephens Minister and enjoyed professing her faith in Jesus Christ. At that time, she was a member of First English Lutheran Church in Kimball. After losing her husband in 2006, Carol moved to Scottsbluff to be close to her daughter and family. Many people had no idea of her poor eyesight because she masterfully handled that disability after participating in training for those with low vision and blindness. She was an inspiration to many, living on her own for years even with her deteriorating eyesight. After a fall down a full flight of stairs in December 2017, where she experienced life threatening injuries and 7 broken bones, including 3 vertebrae in her neck, she showed her resiliency by fighting back against what seemed to be impossible odds. Carol moved to Heritage Estates to recover and it became her home. As a public profession of her faith, she was baptized a second time at the tender age of 82. She was a member of Monument Bible Church in Scottsbluff. Carol will be remembered as always having a ready smile and friendly greeting for those she met and that she loved butterflies, the color purple and her Lord Jesus!

Carol is survived by son and daughter-in-law, Dennis and Carla Goranson, daughter and son-in-law, DeAnna and Jerry Pierce, grandchildren Matthew and Stuart Goranson and Phillip and Kayla Pierce; sister and brother-in-law Shirley and Francis Johnson and numerous nephews and nieces whom she loved and prayed for regularly.

Just when the caterpillar thought life was over, it became a butterfly! Do you have new life in Jesus?