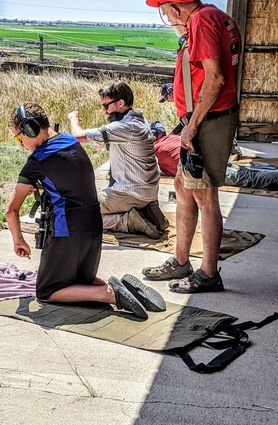 The Appleseed Shoot, sponsored by Project Appleseed, saw five people trained in shooting skills by three instructors, who also took time during the day to offer lessons on the events on the first day of the American Revolution, from Paul Revere's ride to the shots fired in Lexington and Concord in Massachussets on April 19, 1775.

"On the history side, we basically go through the events, lay them out the way they've been proven historically," said Sam Gay, a Cheyenne man who was one of the instructors at Saturday's event. "What we do is teach the events surrounding ... the first day of the American Revolution and the things that tie marksmanship to those events and the events of the next eight years."

Other instructors came from Saratoga and Laramie.

Project Appleseed, also known as the Revolutionary War Veterans Association, is a national group that uses marksmanship instruction to bring the country's history to life, according to its website.

"Aside from the fun and camaraderie of these events, the designed takeaway is a renewed sense of civic responsibility that each attendee can then implement in his or her own community," the website said. "If we can reconnect enough people with the selfless civic virtue of our forefathers, we as a nation will all be better off."

The history lessons occur during a break in the shooting instruction and focus on the facts of the day, Gay said.

"Everybody knows their history," he said. "All we do is expand upon the story and fill the details in. If you read the poem ("Paul Revere's Ride" by Henry Wadsworth Longfellow), it doesn't tell you a lot. The story is there, you just need to put the facts where they belong and then go into the first day of the revolution."

In addition to shooting instruction, Project Appleseed hosts target shooting events around the country where events including shooting at targets a known distance away and some in which the shooter must try to determine the distance to the target and adjust his or her shot accordingly.

Gay said he considered the day a success, as did Sportsman's Club President Charles Cunningham.

"Oh, yes, it was a big time success," he said. "Everybody supported their local economy."