Trees and shrubs vs. cold weather 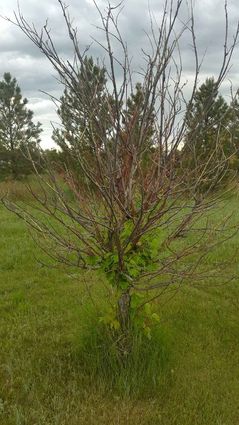 Our first cold snap of the year has now come and gone. If I was a betting man, I would have lost the bet. I told several people that I didn't believe it would snow here. In the higher elevations, absolutely, but not here. Surprise! Never underestimate nature. It's full of surprises. Although I will say that at my place, whatever snow we had Monday night melted as soon as it hit the ground or wasn't very much. Our big issue was sleet Monday night and all day Tuesday. The thermometer said the low Monday night was 27 degrees, Tuesday was 22 degrees. I did forget to harvest the few peppers on the two (yes, I said two) pepper plants I had outside. I remembered them late Tuesday afternoon after it had been sleeting/snowing. I harvested them anyway and they were just fine. In fact, I had them for supper last night. In short, I'm not sure this brief cold spell was enough to do much, if any, harm to our trees and shrubs. But it does bring up an interesting topic.

This year was absolutely terrible for plants, with the cold-warm cycles we kept getting into and the cooler temperatures later into the spring. Very warm one day followed by cold the next. I lost plants that had survived subzero temperatures for years. Most started coming back with a lot of TLC, but they are definitely set back for growth. What hurt the worst, though, is the 80 percent loss of the new lavender plants and damage to some of the older plants. The plants simply couldn't make up their minds if it was time to grow or if they should keep sleeping. The warm days would start nutrients coming up from the roots and the plants would start to wake up thinking it was time to grow then a couple of days later it would be cold again telling them to stop bringing up nutrients. Plants can't react that fast. Since nutrients are in liquid form the cold snaps would freeze them, rupturing cell walls and damaging the plants. It didn't matter if it was trees, shrubs, or perennials. Even my sheltered plants were damaged.

I don't know how the trees may have been affected. My new Crimson Cloud Hawthorns broke off in the wind about halfway up the trunk so they were damaged to start with. They did start coming back out and I made sure they stayed well-watered all summer. Who knows? Maybe they'll make it. I did lose five small maples, one pear tree and one apple tree. Surprisingly, the crab apple and honeycrisp that I didn't wrap and did nothing with at all did very well. They are sheltered by a tall hedge of currants and I think that gave them enough shelter to thrive. They also got a lot of water this summer though. For the rest of the trees it may be a few years before I know how they fared. Trees can take up to four years to show the results of damage, whether by cold, hail, or other damage. In 2018 I lost a very pretty Sunset Maple to the polar vortex in 2014. The damage was classic even though some of it is hard to see in the photo.

As long as the variety of trees and shrubs you planted are developed for our temperature zone, we're a high Zone 4 to low Zone 5, a normal cold winter shouldn't harm them. It's the temperature fluctuations that don't permit the plants to acclimate that does the primary damage. Another significant factor to plant damage is pre-freeze stress. For example, if you haven't been watering your plants they will go into the cold weather at a water deficit. In other words, they are already stressed. Fluctuating temperatures and severe cold just adds another stress factor that the plants may not be able to handle. That's why we emphasize watering your plants, including trees, every chance you get during the winter and at least once weekly during the summer. Every other day for new trees. We always have short stretches of good weather in the winter. I know it's a real pain to drag out the hoses, water, then drain and put them away. But if you want healthy plants that will do well over the winter, then it's a chore we have to put up with.

Trees can show damage in any of a multitude of symptoms. Many are the same for shrubs. The most apparent, and most common, is the spring freeze damage to buds, blossoms, and the tips of new growth. Mostly this will be cosmetic and will not harm the plant in the long term. Wind, of course, can cause extensive damage by breaking limbs and even trunks, potentially requiring the tree be cut down or the shrub removed. An early snow can also cause damage if the leaves haven't dropped yet. If combined with severe cold it just gets worse. The leaves will hold the snow (potentially breaking limbs) while extreme cold will stress the plant or could even freeze the fluids in the smaller limbs. More severe and significant is the damage to the tissues in the trunk, stems, and limbs from fluctuating temperatures. The hot/cold nature of fluctuating temperatures will burst the cell walls so the nutrients escape and are no longer available to the plant.

Frost cracks occur at lower temperatures and are usually found on the west to north side of the trunk. The outer layer of wood will contract more rapidly than the inner layer and will cause a long longitudinal crack (vertical) along the trunk. Once the bark has cracked it will most likely crack every year. Often these are cosmetic and will heal themselves, but they can provide a path for insects if they're bad enough. Sunscald is another winter phenomena that can cause severe damage to trees. Usually it is seen on the southern exposure of the trunk. The bark will freeze at night then warm up in the sun during the day. The temperature difference between the north face and the southern face can be as much as 20 degrees. With sunscald the bark will turn dark, reddish brown and rough. It will eventually separate from the trunk and fall away. If the damage is small the tree may heal itself. Otherwise, the tree or shrub may need to be replaced. I know it's hard to cut a tree down here, but sometimes that's all that can be done. Evergreens are susceptible to winterburn on the needles. This shows up as a scorched-looking or browning on the needle tips downwards. Winterburn is caused by desiccation of the needles by the sun and wind. Unless it's extensive this, too, is cosmetic.

Roots can be damaged by extreme cold, too. Yes, they're underground but the ground freezes. That's why we recommend mulch around your trees and shrubs. That provides a layer of insulation to help hold in what little heat there is in the winter and will also help keep the ground from drying out as fast. Don't pile the mulch up around the trunks, but give it about four inches. Single grind mulch works well because the wind won't blow it away. I'll warn you though. It's ugly and can have large sticks in it.

The key to helping your trees and shrubs survive the cold weather and stay healthy is water. Water them throughout the summer and continue to water them during the winter every chance you get. Plenty of water will ease the plants' stress and give them a better chance of surviving. If you have questions, ask a Master Gardener. It's what we do.