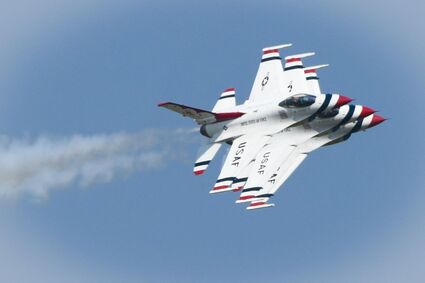 Above: The Thunderbirds perform an aerial demonstration over F.E. Warren Air Force Base July 26, 2021. Practice was held in anticipation of the Wings Over Warren air show, July 28, 2021. Wings over Warren is an annual air show scheduled in conjunction with Cheyenne Frontier Days. (U.S. Air Force photo by Airman 1st Class Charles Munoz)

The Thunderbirds are an aerial demonstration squadron that perform precision aerial maneuvers while demonstrating the capabilities of the Air Force's high-performance aircraft to people throughout the world. The Thunderbirds are here to recruit new Airmen, provide a positive representation of the Air Force and increase retention of current Airmen.

"I worked on C-130s in the Marine Corps and I decided to bring the kids up to see...