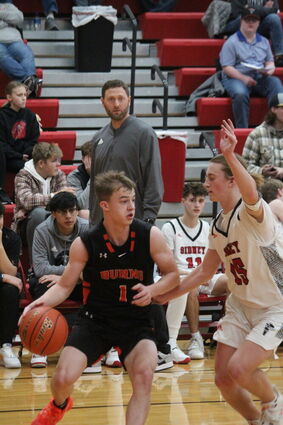 Above: Burns senior Luke Lerwick No. 1 looks for an opening during the Broncs loss to Sidney on Monday.

The Burns Broncs traveled to Sidney, Nebraska to participate in the Cabela's Holiday Shoot out. A neutral tournament game. The first team they faced was the 7-1 Sidney Red Raiders. The Broncs put up a good fight but in the end fell prey to the Raiders 67-49. The Broncs were aggressive and stole the ball away 12 times. The score does not reflect the intensity and tenacity with what the Broncs played.

The now 4-4 Broncs brought down 23 rebounds and as a team had 12 assists. The team hit 36% of their field goal attempts and 41% of their three pointers. At the free throw line they averaged 38...