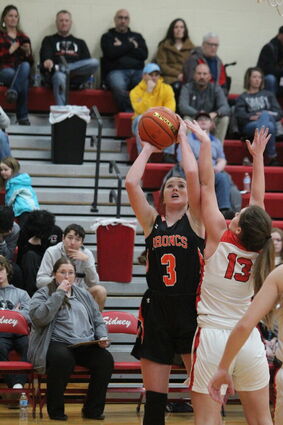 Above: Burns sophomore Brooke Hansen No. 10 goes for two from the outside during Monday's game against Sidney.

The Burns Lady Broncs played in the Cabelas Holiday Shootout Tournament this week. The 3-4 Lady Broncs took on the 7-1 Sidney Red Raiders in a neutral game. The Lady Broncs were not up to the challenge of the Raiders and fell 66-28.