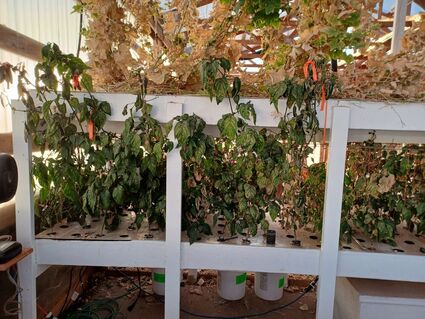 Above: Cold Damage from cold water not Air Temperature.

For the past year I've been working to convert my greenhouse over to full-hydroponic even though I don't seem to be making much progress at times. During CFD I moved all of the peppers over to the first hydroponic tray from the climate-controlled warehouse unit and planted cucumbers in the upper tray. I use vertical growing systems to make the most use of the space available. The peppers have thrived with some of the plants approaching their third growing season. The cucumbers were doing very well, reaching maturity in just over half the time as in traditional growing methods. I had the next two trays set up with one ready to plant when the cold weather struck.

The first round of cold hit hard even though it wasn't really all that bad. I hadn't put heaters in the tanks and never gave it a second thought. The units with plants hold about 300 gallons of water so I didn't think they'd cool off very fast. Was I ever wrong about that. The water temperature went from about 65 to 50 degrees overnight. The peppers did fine but the cucumbers not so much. When I came out the next morning about half of the cucumber plants showed the affects of the cold water and eventually died. Interestingly it was the cold water in the tanks that killed the plants, not the air temperature, although I didn't know that at the time.

I learned a hard lesson and put heaters in both units, including the one that was still empty. Although nothing was planted in that unit it was circulating 80 degree water so it wouldn't freeze. Several nights the ambient temperature in the greenhouse dropped to the teens but had no significant effect on the plants. The only conclusion I can make is that the 60 degree water temperature on the roots kept the plants alive and producing. Yet there was a difference in the plants on the east side of the unit versus those on the west side. The 80 degree unit is on the east side and those plants showed no effect at all from the cold. Those on the west side (away from the hot water) were still alive and producing but showed signs of cold stress. I've been adjusting the temperature since then trying to get a consistent 65 degrees on the plants' roots.

Then it happened. My nightmare come true. We had a night that the ambient temperature in the greenhouse dropped to 5 degrees. I don't think it would have killed the plants except for my nightmare. The pump failed at the same time. Not only did it fail but it failed in the most dramatic fashion by tripping the breaker to both units. The water temperature in every tank and every tray dropped below 50 degrees. That pretty much took out the rest of the cucumber plants and some of the pepper plants. It remains to be seen how those that survived will do with a new pump and consistently warm water. Those cucumbers that survived have a lot of young fruit yet and I did find three mature cucumbers from the prior freeze when I was cleaning out the dead vines that did fine.

Since the freeze I added a second tray that just circulates hot water but has no plants. It has been interesting to watch the various temperatures in the greenhouse with the hot water tanks circulating. I have three sensors on the west wall to give me the temperatures at the low, mid, and upper levels in the greenhouse and one that is in the middle of the peppers. The three sensors are usually within one degree of each other and do a good job of giving me the ambient air temperature. Another thermometer shows the outside temperature and the temperature in the middle of the greenhouse. The inside temperature in consistent among all of the thermometers and sensors except the one in the peppers. It is routinely about 10 degrees or more higher than the others. My conclusion is that the warm water is keeping the air temperature around the plants higher. I think, I hope, that when I get all the units operational that I'll have built-in hot water heat to keep the greenhouse heated. Right now three units are operational and I have eleven more to install. Two will be about double the size of the units currently operational.

This fall I added a solar furnace to the greenhouse to help heat it during cold weather. It is designed with an 18 inch by 36 inch heat sink that runs the entire 32 foot length of the furnace. Behind the heat sink is 16 55-gallon barrels of water to store the heat generated during the day. Everything is painted black to absorb heat except for the clear polycarbonate top. I've added duct fans to circulate air inside the furnace and to take the air from the furnace to the greenhouse. With good sunny days it seems to work fairly well, reaching an internal temperature of 160 degrees. However...yes, there's always a however...I used plastic barrels. They don't transfer heat as well as steel barrels so the unit doesn't store heat well. Guess I'll be looking for used 55-gallon steel drums next summer. In May 2019 I wrote about the greenhouse Don Hollingshead had built for his wife. That greenhouse is the dream greenhouse for a home gardener. His entire north wall is line with 55-gallon steel drums from floor to ceiling. Inside it's shirt sleeve temperature even with sub-zero temperatures outside. Don has no supplemental heat in the building. It's all passive solar.

Currently I'm just about ready to start pouring a concrete floor in the greenhouse. Concrete is the best product for keeping a hydroponic operation clean which is critical in hydroponic systems to prevent plant disease. But there's an added benefit besides just cleanliness. Concrete holds heat in the winter and releases it slowly at night. That will provide heat from the circulating hot water as well as from the thermal mass of the concrete. Materials that provide thermal mass are very dense such as rock, concrete, tile and plaster. Most often it's placed to receive direct sunlight in the winter but not in the summer. The spin-off benefit of thermal mass is that it cools during the summer months. Built-in heating and cooling system. I can deal with it.

Overall I've had a very good experience with the greenhouse and hydroponics, even with the hard lessons I've learned along the way. The cold temperatures have damaged the plants but they're still producing. If they'd been planted outside they would have died a few months ago and I'd be finished for the winter. I've picked all the mature cucumbers and the peppers are still in good shape. Believe it or not peppers are pretty resilient plants. Although several of the plants appear dead I think I'll leave them alone for a while. As long as the roots are alive, they have a habit of coming back. I'll find out in a few weeks as I continue my adventure in hydroponics and greenhouses. If nothing else, it's been fun. If you have any questions, ask a Master Gardener. It's what we do.