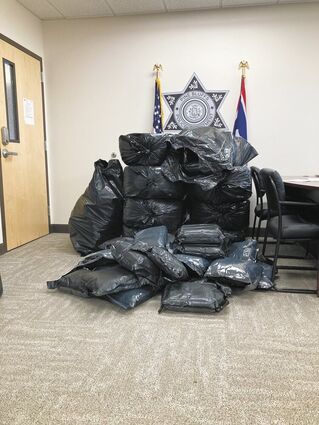 Above: A traffic stop harvested a multitude of bags containing 344 pounds of marijuana, and 6.1 grams of methamphetamine.

Pine Bluffs Police Chief Chance Walkama stated, "On Tuesday, February 1, 2022 at approximately 1153 hours, the Pine Bluffs Police Department stopped a black Honda Ridgeline with Wyoming License plates for speeding eastbound on US 30, 55 mph in a posted 40 mph zone. The vehicle was stopped and the California driver was contacted. During the traffic stop the officer noticed the distinct order of raw marijuana coming from within the vehicle. He also observed three large garbage bags containing several smaller black plastic bags. A search of the v...