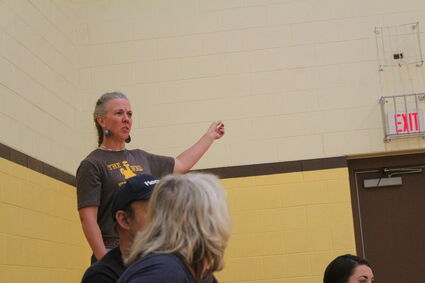 Above left: Kayla Madler of Burns asks a question to the candidates.

The people were on the bleachers with three of the candidates in the middle of the gym. Burns had set up a debate for the candidates that are running for Laramie County Sheriff.

Four candidates were invited but only three showed up. There is one more candidate but it will be put on the general elections. The ones at the debate will be voted on in August. The candidates for the night were Captain Don Hollingshead, Brian Kozak, and Boyd Wrede.

Mike Heath introduced all the candidates giving them 2 minutes each to give their platform. Then there were five subjects that they would be addressing...