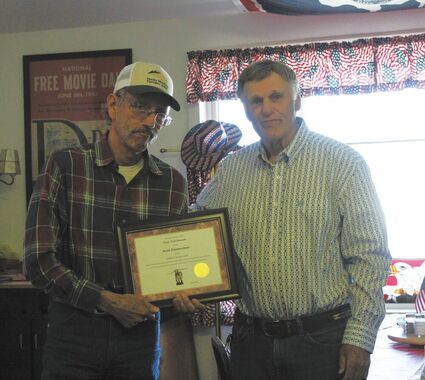 Above: Scott Zimmerman receives an award from board member Jerry McWilliams for appreciation of all his service and devotion to the Texas Trail Museum.

You live and breathe a part of the past that is set up with knowledge and to learn every day at a museum. On June 25th the Texas Trail Museum had their annual meeting at 1 p.m. at the Donald Eisenhauer American Legion Post 60.

It started with president Scott Zimmerman welcoming everyone. He introduced all the board people that were at the meeting along with the staff. Mary Chowns has been working at the Texas Trail Museum for seven years. He then had the guest's introduce themselves with a little history.

Minutes were approved. The treasurer's report is with checking and investments. The balance is $453,515.00. Zimmerman said he would give anyone the information to be able to look at the investments. Some of the investments were good and others not so good. But for the most part they were at positive.

Five new windows were installed upstairs at the Walker Boarding house, they had repaired the steps to the upstairs of the house, three sides of St. Mary's church were re-sided and new shingles were installed on the Union Pacific Rail Road telegraph building. These are just some of the repairs and touch-ups completed on the property.

For the highlights of the past year, the Texas Trail Museum has helped load display material to the Kimball Museum for use in their Smithsonian Traveling Exhibit. The Nebraska Art Council also assisted with that. This was on Farmer's Day last year and they had seven hundred people visit the museum.

Another highlight is the Manitou Gallery/Nelson Museum of the West in Cheyenne who donated to the Texas Trail Museum. They received a large book collection and American Indian baskets. The board told them yes and were thrilled to receive these items.

An update on the museum outreach was done by Jerry McWilliams. He has been doing the newsletter and Facebook. McWilliams then gave Zimmerman a certificate of appreciation for all his hard work at the museum and for being president.

Chowns gave highlights for the year and blessings. She received help having some new book cases brought in. She said, "Jeff Fornstrom is in the process of painting five buildings, and two of the board members put a new coat of paint on the Bower Cabin. What we need to have done is the exterior door to the school porch needs to be replaced. The Walker House windows on the main level need to be replaced. The wallpaper in the upstairs bedrooms need repaired or replaced. The big issue is the roof of the Bowers Building, it is leaking in at least three places. The windows in the school will need to be replaced and the caboose needs to be repainted. These are some of the concerns and we are asking the public if they could help. It would be great to have some volunteers."

The next item in the meeting was mold on the teepee in the museum that should be remedied. Nola Cary has done some research on cleaning the teepee without doing it any more damage.

At the conclusion of the meeting board elections were held. This is the time where the people become members for the next meeting to vote on who is in what positions and who is on the board. Which it looks like everyone was on the board.

After the meeting the members wandered through the Texas Trail Museum to see the new items. They have received Military Payment Certificates, Military aircraft books, and astronaut photos. They had someone donate Linda's Café employee's pictures and menus from 1981. Women's hats from the 1940's-1950's, and a 1902 wedding dress. The biggest collection received was 1,670 books and 37 Native American Indian baskets from the Manitou Gallery/Nelson Museum of the West in Cheyenne. Some of the books are, History of the Old West, History of Native American Indians, and plenty of others. There are some duplicate books for sale in the gift shop.

At the end the Donald Eisenhauer Auxiliary of the American Legion Post 60 served a great meal of ribs with sides, and desserts. It was a great turn out of people attending the meeting and some awesome food. The meetings for the board and members or anyone who just wants to attend a meeting is at the Pine Bluffs Donald Eisenhauer American Legion Post 60 on the third Thursday of the month at 5:30 p.m.

There are lots of new items. You can look for hours to see everything at the Texas Trail Museum. It is an adventure and a learning experience every time you go into the buildings.