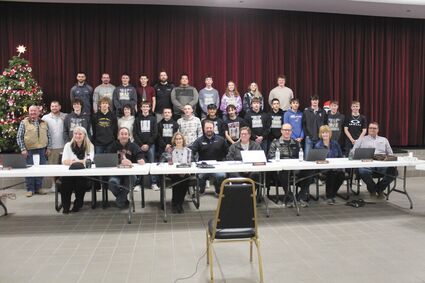 Above: Members of the Laramie County School District No. 2 School Board members with the Pine Bluffs High School Hornets Champion football team and coaching staff.

The board gave recognition to a well deserved team from the school district. Laramie County School District #2 had the committee of whole meeting on December 7th at 7:00 p.m.

First was the welcoming of the three new board members which were Cody Nusbaum, Kendra Roeder, and Michael Lerwick. Lady chairman Julianne Randall informed everyone that the reorganization of the board leadership and the appointment of the Rec Board members will be at the regular meeting on Monday December 12th.

Misty Gallegos presented that enrollment has increased since last month and gave a summary of the financial report.

Tracy Schneider, curriculum director, presented the policy of employment of students. The policy is needing some work. Board trustee Billie Wilson and board trustee Mike Olsen had concerns about the policy. Schneider is cleaning up some concerns of advanced college placement and graduation requirements.

The Burns Future Farmers of America Advisor Will Luna, President Katherine Olsen and Vice- president Hayden Hubbard put together a presentation of what the Burns FFA has done so far this year. For the Laramie County Fair they had 16 members in the Kiwanis sale. At the State Fair Katherine Olsen had a Champion sheep. The Burns FFA put on a barbecue at the beginning of school to introduce the officers and the new advisor. There were 160 people that attended. The FFA members did well at the Laramie County Community College livestock judging. Hayden Hubbard told about his experience on going to National FFA. He took bronze in the Creed Contest. Luna said, "Eight members went to the Fall State Leadership conference in Casper. The members enjoyed it." The Burns FFA chapter helped with the Cheyenne Livestock Expo. They put 640 pens together. And last but not least the Burns FFA had a float in the Cheyenne Christmas parade. 50 percent of the chapter was on the the float. 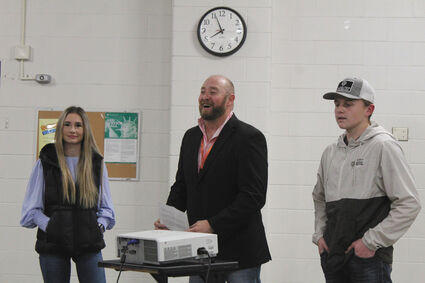 Laramie County School District #2 Superintendent Justin Pierantoni was contacted by Laramie County Treasurer Debra Lee about the trustee boundary line. There are some roads that do not exist any more. The school board wants to think about how to go about it.

Todd Sweeter, principal of Pine Bluffs High School discussed how the high school is doing. He had issues with the ACT scores. But with the second round of testing and the great burritos that his daughter made the scores are up.

Next was facilities report gave by Kim Nelson. They installed security film on the Pine Bluffs Elementary windows and they are working on the first phase of LED classroom lighting,

Shannon Perlinski gave a report on the special education.

In closing, the board of the trustees said they had a great time at the Wyoming School Board Association 2022 annual Conference.