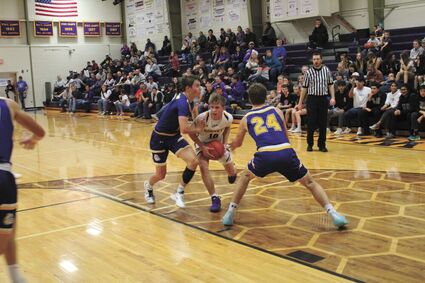 Above left: Hornets No. 10 Ryan Fornstrom battles Wheatland's No. 1. JP Anderson and No. 24 Jacob Hyche.

The Wyoming State basketball champions, Pine Bluffs Hornets boys varsity basketball team started the season off with the Burns Insurance Winter Classic. The Winter Classic had them playing the Wheatland Bulldogs, Douglas Bearcats, Newcastle Dogies and Torrington Trailblazers. Each team will play four games over a three-day span. The Hornets did well winning 3-4 in the round-robin tournament. The state champions wanted to get back to their championship level of playing and this was their chance.

The Hornets first challenge would be the Wheatland Bulldogs. Dalton Schaefer would be the first to hit a three-pointer. Ryan Fornstrom returned to his ways slicing up a defense as if it were a cake for him to cut. Fornstrom got a lay-up for two. Stu Lerwick got a rebound and put it back up for two. Schaefer hit another three and Stu Lerwick hit a three also. The Hornets took an early lead in the game with the first quarter ending with a score of 17-6. The second quarter was not much better for the Bulldogs and the Hornets went inside and out to score points. Schaefer stole a pass from the Bulldogs and went coast to coast for the score. Fornstrom continued to find small cracks in the defense and hit a lay-up for two. Fornstrom is not only good inside but he can put up three when he wants. Fornstrom hit a three late in the quarter. Fornstrom got a break away run and hit a lay-up. The Hornets run up a 27-10 lead at the half.

The third quarter started with Fornstrom taking a pass from Lerwick for a quick two points. Then Fornstrom returned the favor and passed the ball to Lerwick under the net for another quick two. Fornstrom nailed a three midway through the quarter. The Bulldogs called a time out with 4:07 seconds left in the quarter with the score 39-14. Fornstrom and Lerwick ended the quarter hitting three straight threes to build their score to 50-23. The Bulldogs and Hornets went back and forth on the court with Schaefer nailing a three and a jumper with a foul. Lerwick threaded his way through the defense for a nice lay-up. The Hornets took the first game 61-46.

After the game we talked with Collin Jessen. "It is nice to have the first one under our belts. We haven't played basketball for a while. Feels good to get back on the court."

Leading scorer for the Hornets was Ryan Fornstrom with 17 points. Stu Lerwick and Dalton Schaefer tied with 14 points.

Next up for the Hornets, the Bearcats from Douglas. The Bearcats came out hard and fast against the Hornets right from the tip off. It looked like they caught the Hornets a little off guard with backcourt pressure hitting from the outside. The Bearcats hit four straight threes before Lerwick was able to nail his own three. Fornstrom was still slicing and dicing the defense and hitting lay-ups. This was a fast quarter and ended with the Bulldogs holding an 11-16 lead. The second quarter the Hornets outscored the Bulldogs 13 to 11. Lerwick got fouled and hit both of his free throws. Alex Sloan hit a three and Lerwick drove to the basket with a lay-up and sunk the ball and drew the foul, which he nailed. Lerwick got fouled again and his both free throws but it was not enough to over come the lead of the Bearcats and the Hornets go into the locker room trailing by three, 24-27.

Both teams are now hitting shots and picking apart the defense. Fornstrom continued to pick apart the defense and hit some threes. With 3:22 second left in the quarter the score was 35-43. The Hornets were able to hit a three and Lerwick hit a lay-up and the third quarter ended with the Hornets trailing 41-52. The Hornets shooting seemed to cool off, as they could not buy a three. Lerwick came out strong hitting a couple of jumpers and dropping a free throw after a foul. Fornstrom found more holes in the Bearcat defense and hit a lay-up for two. With 4:16 seconds left in the game the Hornets pulled within three 53-56. But that is as close as they would get. The Bearcats held off the Hornets rush and closed out the fourth quarter with a 56-65 final.

Now the Hornets faced the Newcastle Dogies. The Hornets were not looking for a repeat of the last game and came out hard against the Dogies. Dalton Schaefer made a nice reverse lay-up to start the game. Collin Jessen hit a jumper from the right side. Fornstrom started his slicing up of the defense. Schaefer hit a three and Lerwick got fouled dribbling around the key and hit both shots. Fornstrom found a hole and shot up for the lay-up. Schaefer intercepted a pass and went coast to coast for the score. The first quarter ended with the Hornets in the lead 27-8. Lerwick started the quarter off by taking a pass from Alex Sloan and making the lay-up. Schaefer passed to Jessen for an easy lay-up. Justin Lerwick made a nice drive to the basket for a couple of points then hit a three from the right side. Halftime showed the Hornets with a comfortable lead 41-12.

The third quarter started with Schaefer getting a pass from Jessen and hitting a easy lay-up for two. Lerwick hit another three. (With this shot Stu Lerwick has breached the 1000-point career mark). Jacob Slade hit from inside the arch. The third quarter ended with the Hornets in command 53-20. The fourth quarter went like the third. The Hornets were able to score inside and out. Schaefer hit a three and Jessen drove in for the lay-up and drew the foul. He sunk the shot and the Hornets were on a roll. Jessen got a pass from Sloan and drove for the lay-up. Wyatt Carter nailed a three pointer at the end of the game. The Hornets beat the Dogies 64-36.

This was a monumental game for Stu Lerwick. The 1000 points mark in not hit very often and those that do are truly standout performers. If you get the chance to watch Stu Lerwick play it is special. He and the team look like they are truly just having fun. You could see Stu flapping his arms, dancing around, laughing and smiling all the time. The entire team looks like they are truly just out to have fun and win.

The final game for the Hornets would be against the Torrington Trailblazers. The Trailblazers would prove to be more of a challenge than the Dogies. Fornstrom would start the scoring off by hitting a three from the left side and then taking a pass and driving through the defense for two. Lerwick got fouled again driving towards the basket and hit both shots. Jacob Slade hit from the outside. This game was reminiscent of the Douglas game but not quite as physical. The first quarter ended 15-10 in favor of the Hornets. Jacob Slade started the second quarter off by sinking a shot from under the net while Fornstrom did his thing slicing through the defense and hitting the lay-up for two. Justin Lerwick drove hard at the Trailblazers defense and drew the foul. The Hornets were having trouble finding the net on the long shots and fell behind the Trailblazers at the half 23-24.

The third quarter had Lerwick driving in and pushing the Trailblazers defense. Lerwick found the crack and scored on the lay-up. Fornstrom wove his way through the defense and hit for two. The Hornets team picked up their pace and had the Trailblazers trying to keep up. Lerwick, Fornstrom and Jesssen started to take control of the game hitting shots and moving the ball. The third quarter ended with the Hornets slightly ahead of the Trailblazers 46-39. The Trailblazers are not out of it yet. Lerwick, Fornstrom and Jessen kicked it up a notch. Lerwick was running all over the court hitting shots from behind the board in the field and under the net. Moving through the defense and getting fouled. Hitting his free throws. Ryan is keeping the defense off balance as he cut through them and scored points on lay-ups and jump shots. Jessen continued to hit shots from the outside and inside and the Hornets racked up 22 points in the fourth quarter. The Trailblazers tried to keep up but just fell behind the Hornets in the end. The Hornets won the game 68-58.

Good luck in the season.